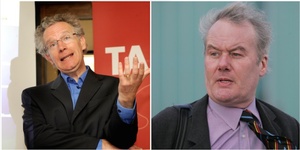 Fintan O’Toole: Prince Philip – asylum-seeker and citizen of nowhere, but rich and white https://t.co/V2QgWjG58K via @IrishTimesOpEd

Via Kevin Myers [full article at link below]

…Seldom has Fintan O’Toole plumbed the depths that he did with his vilely dire column about Prince Philip, headlined “asylum-seeker and citizen of nowhere, but rich and white.”

This is typical of O’Toole’s habit of conflating intellectually unrelated issues, which on this occasion even referred to the genocide of the Jews.

In a survey of recent British history, he said: “In October 2016, high on the fumes of Brexit, the then prime minister…. Theresa May attacked those who “have more in common with international elites than with the people down the road”. She warned that “if you believe you’re a citizen of the world, you’re a citizen of nowhere”.

He re-interpreted her words as follows: “May was invoking a trope used against Jews by both the Nazis and by the Stalinist Soviet Union: the rootless cosmopolitan.”

This is simply astounding. To have compared Theresa May – apparently “high on the fumes of Brexit” – which she had opposed – with the anti-Semites of the Third Reich and the USSR is an honour perhaps never before conferred upon a British prime minister.

You can argue that May was wrong (and I would not) in her observations of the “citizen of the world”. But she did not use the term “rootless cosmopolitan,” and you cannot intellectually or morally suggest that her opinions can in any way be linked to the murder-machines of Auschwitz and the Gulag archipelago.

To do so is worse than defamatory. It makes her a retrospective handmaiden of The Final Solution…

…Four years ago, he joined the (highly-successful) lynch-mob against me, inventively alleging that I had said that a successful woman must be a ‘monstrous harridan’, a term I have never used.

Of the pay-controversy in the BBC at that time, I wrote: ‘Of course, in their usual, pitifully imitative way, Irish tabloids have tried to create a similar controversy here. That’s impossible, because of the ubiquity of Miriam O’Callaghan and Claire Byrne across the airwaves.’

O’Toole’s version of this runs as follows: ‘Myers tells women to forget equality and man up – but then complains about the ubiquity of Miriam O’Callaghan and Claire Byrne on the airwaves.’

As you can see, a complete fabrication; a process he clearly understands thoroughly when we look at his next words about the late prince.

“So why is Prince Philip’s rootlessly cosmopolitan background of so little concern to the culture warriors of the right? The answer is in those baby blue eyes……”

There we are; a straightforward accusation of racism…

…Of Philip, O’Toole then sneered: “Even the extreme privilege he attained through his marriage is construed as a kind of martyrdom: he gave up everything for his adopted country.”

He arrived in England poverty-stricken, but then began a remarkable career in the largest navy in the world. He turned out to be an outstanding and courageous sea-officer during the war and would very probably have ended up as First Sea Lord, but that possibility vanished with his marriage to the Queen (an event which O’Toole seedily describes as: “this nomadic adventurer, this nowhere man, seduces the princess royal”).

He then buckled down to seven decades of wearisome public service. The only time I met him was at Buckingham Palace about eight years ago, when he was stoically enduring the horrors of yet another state reception, at eight in the evening shaking the hand of every single person present. He was then 91. [more at link below]

46 thoughts on “Fotoole Me Once”