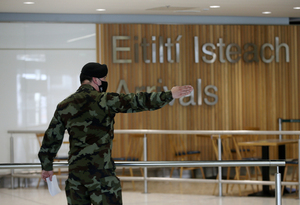 The @EU_Commission has concerns regarding the mandatory hotel quarantine in #Ireland for travelers from 5 EU Member States. Today we sent a letter to Irish authorities asking for clarifications. The objective pursued by Ireland could be achieved by less restrictive measures. pic.twitter.com/wcRQVP2Xh4

“The commission has concerns regarding this measure in relation to the general principles of EU law, in particular proportionality and non-discrimination.

“The commission believes that the objective pursued by Ireland, which is the protection of public health during the pandemic, could be achieved by less restrictive measures.”

“We invite the Irish authorities to align more closely their measures taken with the provisions of the council recommendation member states agreed in October and updated earlier this year.”

The commission has given Ireland ten days to respond.

NEW: People travelling abroad for surrogacy will be exempt from mandatory hotel quarantine when they return, the High Court has heard. The Minister is drafting regulations and hopes to have them finalised as soon as possible. They will still have to quarantine at home. @rtenews

Between A Hard Rock Place

Back In The Old Country [Updated]