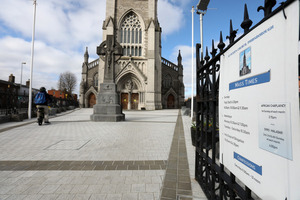 The Government does not seem to care that in this respect the country is out of step with most other countries in Europe. At Easter, we had a ludicrous situation that churches in the North were able to celebrate Easter while in the South they were bolted and barred.

It is “disproportionate and exceeds the limits of government authority.”

Take Me To Mass [Updated]

39 thoughts on “Get Off Your Knees”