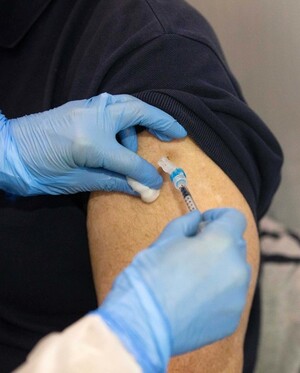 Speaking on RTÉ’s Today with Claire Byrne, HSE CEO Paul Reid said the benefits that the HSE is seeing from the vaccine rollout so far is “significant”.

Mr Reid said 1.3 million people have been vaccinated to date, with 24.5% of the eligible population receiving dose 1 and 10% of the population fully vaccinated.

He said it is a huge relief for healthcare workers.

He said yesterday saw the highest number of vaccinations at almost 39,000, with close to 150,000 vaccinations expected to be completed by the end of this week.

He said people “do not have a vaccine choice” and reiterated that the AstraZeneca vaccine is the “approved vaccine for this age group” [65-69] and that he expects “the vast majority” of people to sign up to receive the jab.

Benefits from vaccine rollout so far are significant – Reid (RTÉ)

A total of 168 people have suffered rare blood clots after taking the AstraZeneca coronavirus vaccine in Britain, and 32 have died, the UK’s medicines regulator said.

The figures for clots or “thromboembolic events” run up to April 14, by when 21.2 million people had received first doses of the vaccine, according to the Medicines and Healthcare products Regulatory Agency (MHRA).

It represents a rise of 10 deaths compared to the period up to April 5, and an additional 68 cases.

The U.S. Centers for Disease Control and Prevention (CDC) is investigating the death of an Oregon woman and the hospitalisation of another in Texas after receiving Johnson & Johnson’s COVID-19 vaccine, state health officials said.

The incidents come as advisers to the CDC are set to meet on Friday to consider whether it is safe to resume injections of the single-dose vaccine, while senior health officials prepare for a green light.

A number of unusual blood clots in the brain have been reported in Ireland among people who received the AstraZeneca vaccine.

The vaccine was recently confined to use in people over 60 in Ireland following as assessment by the European Medicines Agency which found a probable link between the jab and unusual blood clots with low blood platelets.

The Health Products Regulatory Authority (HPRA), which polices medicines in this country, said as of April 19 a very small number – fewer than five – blood clotting events in combination with low platelets were reported.

31 thoughts on “‘You Do Not Have A Vaccine Choice’”