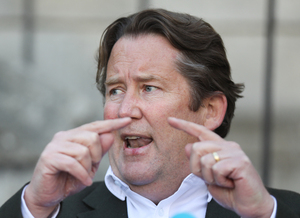 Further to dismay over the purchase of entire housing estates by real estate investment trusts or REITs.

…While a TD for Dublin North in 2008, Darragh O’Brien declared in the Dáil register of interests holdings in a Standard Life Assurance savings policy. The policy later promised returns to holders through investments in REITs, which were introduced to Ireland in 2013 through legislation brought by finance minister Michael Noonan…

…O’Brien further declared he was a landlord from 2007-2015. He found himself in possession of not one, but two houses, so chose to rent one out, starting in the heady, pre-crash era.

O’Brien along with his wife bought a family home in 2007, but decided against selling his former residence – a two-bed apartment in Malahide.

O’Brien rented the property first to a family member from 2007 and later to other private tenants, before finally selling the property at 11 Castle Heath, Swords Road, Malahide. He sold it for €290,000 in March 2015.

…O’Brien’s government and party colleague Robert Troy is another landlord with a serious property portfolio. And he knows how to protect his interests.

In 2019 he took an unsuccessful Residential Tenancies Board (RTB) case against a tenant renting from him a €1,250 per month one-bed flat in Phibsborough, Dublin 7. Troy had let the flat to small business owner Paul McGahan. The flat is “a tiny little thing” according to McGahan: “You wouldn’t fit two people into this place,” he said…

Fianna Fáil ministers, the REITs and the housing crisis (The Ditch)

9 thoughts on “The Gaffer”