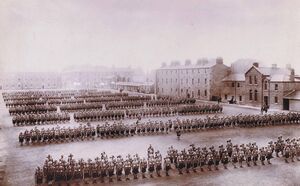 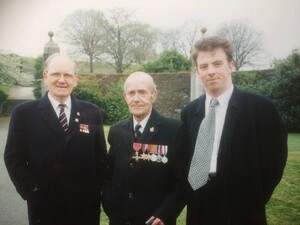 From top: The Argyll and Sutherland Regiment in Richmond Barracks; Eamon Delaney (right) with veterans at Islandbridge, Dublin in 1995

The Lion and the Shamrock.

A project devoted to the British Army’s legacy in Ireland with talks, tours, an online photographic archive as well as personal histories, many with the descendants of those who served in the two World Wars.

There does seem to be a tremendous, almost obsessive, focus on the events of 1916-21. By contrast, the legacy that I am exploring remains relatively undeveloped, or so I am finding, and people tell me.

World War One, in particular, is a huge experience which both communities shared in, but which I don’t believe cooperate on as much as they could.

When I set out, I hadn’t really planned on such a reconciliation ‘political’ role for the project but many people have encouraged me.

The plan is to cooperate, through public events (or virtually, these days) at which the descendants of WW1 veterans, and others, could share their experiences and those of their forbears. North and South.

The Lion and the Shamrock

They Had Their Own IRA

8 thoughts on “Nor The Years Condemn”