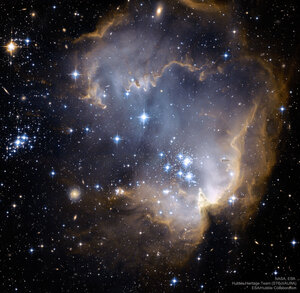 Behold: what looks like a cosmic oyster filled with pearls but is, in fact, the star cluster NGC 602. To wit:

Near the outskirts of the Small Magellanic Cloud, a satellite galaxy some 200 thousand light-years distant, lies 5 million year young star cluster NGC 602. […] Fantastic ridges and swept back shapes strongly suggest that energetic radiation and shock waves from NGC 602‘s massive young stars have eroded the dusty material and triggered a progression of star formation moving away from the cluster’s center. At the estimated distance of the Small Magellanic Cloud, the featured picture spans about 200 light-years, but a tantalizing assortment of background galaxies are also visible in this sharp multi-colored view. The background galaxies are hundreds of millions of light-years or more beyond NGC 602.