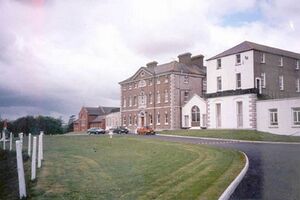 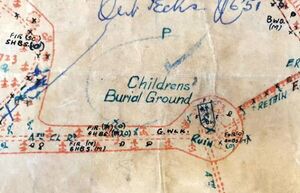 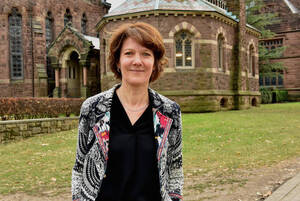 From top: the former Bessborough Mother and Baby Home in Cork; A map indicicating a children’s burial ground on the grounds of the former institution; Professor Clair Wills

Ireland-born, Cambridge-based. English Professor Clair Wills, in a 10,000-word review of the Mother and Baby Home Commission of Investigation report for the current issue of London Review of Books, writes:

….the home with the worst infant mortality rate was Bessborough in Cork, where over the twenty years between 1934 and 1953 ‘in the region of 25 per cent’ of babies died – five times the rate for Ireland in 1950. In 1944 the newly appointed chief medical adviser for the Republic of Ireland, James Deeny, tried to close the home because in the previous year 180 babies had been born there and 100 had died.

…Bessborough opened as a mother and baby home in 1922, in a Georgian house on 150 acres in Blackrock, to the south-east of Cork City. It was owned and run by the Congregation of the Sacred Hearts of Jesus and Mary (also, initially, a French order) and its remit – as recommended by the Cork Board of Guardians, which was responsible for the poor law union – was to remove unmarried mothers from workhouses.

The grounds were subsequently enlarged to 200 acres, and in 1930 a maternity ward was built so that women who entered the home no longer had their babies in Cork District Hospital (known as St Finbarr’s), but on the Bessborough estate itself. T

he home took in unmarried expectant mothers and women who had recently given birth from all over Ireland, paid for by local health authorities. It also accepted private fee-paying unmarried mothers. Until 1946, when the rules changed, a considerable number of these private patients, willingly or under family pressure, discharged themselves from Bessborough after giving birth, leaving their babies awaiting informal adoption or boarding out through the Catholic Women’s Aid Society.

Infant mortality was highest among those babies whose mothers had left the home, and who seem to have been routinely neglected. From the mid-1950s onwards, another adoption agency, St Anne’s, brought unmarried expectant mothers back from the United Kingdom to have their babies at Bessborough, from where they would be adopted.

All these different organisations – St Finbarr’s, the Catholic Women’s Aid Society, St Anne’s and Bessborough itself – had responsibility for the burial of children who died under their care. Private burial grounds were not legally required to keep records of burials, but canon law did require records to be kept. Yet there are almost no burial records at all.

Given the extraordinarily high mortality rates, the involvement of adoption agencies and the absence of records, it is no surprise that many people believe some of the babies did not die, but were ‘sold’ for adoption. The report did not find evidence for a trade in live babies from Bessborough, although this doesn’t mean it didn’t happen, and critics, including the campaigning journalist Conall Ó Fátharta, question the commission’s conclusions. But it does suggest that whatever did happen there, ‘economies’ were at the back of it….

… During the 1920s Bessborough’s dead babies (or some of them) were buried in the ‘Poor Ground’ section of St Joseph’s Cemetery in Cork, at the cost of ten shillings each, which the congregation had to recoup from the health authority responsible for the child’s maintenance. It was expensive, and a hassle, and it would have been cheaper and easier to bury them on public assistance in the Cork District Cemetery at Carr’s Hill, a former famine ground. And perhaps that is where they are, though no burial register has been found to prove it. Or perhaps they are buried in unconsecrated ground somewhere on the Bessborough estate. That would have been the cheapest way of dealing with the problem, and was the way things were dealt with at Tuam.

At Tuam there are bones, but no burial ground. At Bessborough it is the other way round. There is a burial ground, but no bones. Inside the estate there is a small plot, which was opened in 1956 for members of the order:

More than nine hundred children died in Bessborough or in hospital after being transferred from Bessborough. Despite very extensive inquiries and searches, the commission has been able to establish the burial place of only 64 children. The Congregation of the Sacred Hearts of Jesus and Mary who owned and ran Bessborough do not know where the other children are buried.

Unlike Tuam, which closed in 1961, the Bessborough Mother and Baby Home continued to operate until 1998. Members of the congregation claimed not to know where the children might be buried. The commission states that it…

‘…finds this very difficult to comprehend as Bessborough was a mother and baby home for the duration of the period covered by the commission (1922-98) and the congregation was involved with it for all of this time. The commission finds it very difficult to understand that no member of the congregation was able to say where the children who died in Bessborough are buried.’

But perhaps forgetting where babies were buried is a way of forgetting that they died.

One sister who lived at the home for fifty years between 1948 and 1998 could not recall the deaths of any children at all during that time, although 31 children died there between 1950 and 1960 alone. Her name is given as the informant on a number of death certificates. It is a powerful act of erasure.

No grave, no baby. No baby, no grave.

‘Tread Softly, For You Tread On The Bones Of My Family’