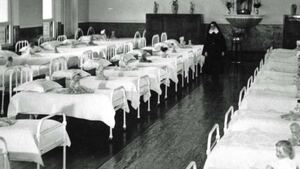 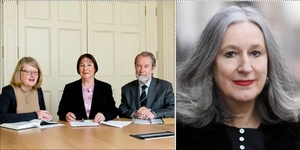 On RTE’s Today with Claire Byrne, presented by Damien O’Reilly.

Historian and former head of special projects at the National Archives of Ireland Catriona Crowe spoke about her essay in the Dublin Review which outlines how the testimony of Caroline O’Connor, Noelle Browne and Annette McKay – given to the Confidential Committee of the Commission of Investigation into Mother and Baby Homes – was misrepresented in the commission’s report.

Damien O’Reilly: “Just back, once again, to the discrepancies, that you discovered in your investigation and back to Caroline and to Noelle and, indeed to Annette later, who you refer to in your essay as well, explain, for example, how deep these discrepancies were?”

Catriona Crowe: “Well, in the case of Caroline O’Connor, we have what amounts to about a six-page vivid testimony which she wrote down, she gave a copy of that to the commission and she read it out during the course of her session with them. She spent just over an hour, speaking to the confidential committee. As you’ve just said, she had the brilliant inspiration to tape that herself. So I was able to listen to that tape and then identify Caroline in the confidential committee report where everything is anonymised so you don’t get the details of what institution people were in, or any allegations about individuals, fair enough. That would require them to be able to comment on it.

“So. Those six pages of vivid testimony, that hour long discussion that she had with the confidential committee is reduced to two paragraphs and three quotes. The three quotes allegedly come from her own words. One quote is accurate, one is entirely made up, it does not exist either in her own testimony or in the tape that was made. And the third is botched. She’s misquoted and it makes something very serious in her life sound grotesque in a way that it was not.

“So what does that tell us? It tells us that, yes, they made a tape, they told her they would make a tape, they said nothing about destroying the tape, by the way, after the event, which is of course what happened. Did they listen to the tape when they were coming to the point of trying to reduce this material down to a size for their confidential committee? It would seem they didn’t.

“They were taking notes. Were those notes impressionistic notes? Or were they made by a stenographer who knew shorthand? I mean we shouldn’t have to go into all of this detail. But it’s still a mystery how survivors could be so misquoted and misrepresented in the confidential committee and, primarily, so reduced. Two paragraphs from all that wonderful information.”

O’Reilly: “Is the testimony, in its collective, does it take from the actual thrust of the final report when you take all of the testimonies together even if there are paragraphs here and quotes here and there. Do you think that it takes from the overall thrust and final report?”

Crowe: “Well the fact is that the commission decided itself not to include it. This is main issue here. This is the real problem. The commission, by the admission of Professor Mary Daly who appeared at a seminar in Oxford last week, did not include the 550 testimonies to the confidential committee as part of their final report and those testimonies did not inform their conclusions. That is critical here. Because some of their conclusions were that there was no evidence of physical abuse in the mother and baby homes, no evidence of forced adoption, that the church and state were not the main perpetrators…”

O’Reilly: “Yeah, it was family members…”

Crowe: “Yes, it was family members and fathers which goes against every idea of historiography we have for the 20th Century, so….”

O’Reilly: “They were complicit but probably not the main drivers. I mean where did families get these ideas in the first place. But the point I’m trying to make is the commission left out the testimony of 550 people. There were 60 others that spoke to the investigative committee which they did apparently take into account or say they did. We are now missing a huge chunk of what should have had a bearing on the conclusions and recommendations of this commission. They are not there. That is serious.”

Crowe: “It’s remarkable when you compare this commission to other previous ones. That the commission’s decided not to give a press conference when the report was published, not to launch it and own it themselves as their commission’s report. And to take questions from journalists and from survivors as Sean Ryan did back in the day when he published the report on industrial schools, as Martin McAleese did [Broadsheet note: Martin McAleese took no questions following the publication of his report into the Magdalene Laundries], whatever the shortcomings of these reports, their authors owned them and came out and answered questions, legitimate questions about them. That has so far failed to happen with this commissioners and it is mysterious. One would think, after producing 3,000 pages, five years of work, they would want to come out and defend what they have written and their conclusions…”

Crowe: “Many people who went to the confidential committee desperately wanted to speak to the investigative committee and were not allowed to do so. So fine, you can actually…”

O’Reilly: “How were the people that spoke to the investigative committee, how were they chosen?”

O’Reilly: “How many of them were there?”

Crowe: “64. I think 19 applied directly to go there [to the investigative committee]. Now I’m not an expert on this…but I did count in the report the number of survivors they mention from the different institutions…”

O’Reilly: “And was the evidence gathered from the investigative part of the commission, did that form the main body of the report? Whereas the 550 people who spoke to the confidential side of the commission, was their evidence disproportionate in the final report?”

Crowe: “It wasn’t there at all. That’s the point. The evidence from the confidential committee remains in a bubble to one side. It does not inform the conclusions.”

Crowe: “No! We’ve been told that by a commissioner.”

Crowe: “They [people working within the commission] may have been lawyers, our learned friends are, of course, very experienced people in all kinds of ways, they may be used to interviewing people and writing reports but those are legal interviews, they had no training in how to deal with people who were telling very traumatic stories to them and they certainly had no training in oral history and how to conduct those kind of interviews properly. So, yes, they were lawyers, grand, great. It didn’t meet the case. And in fact it doesn’t matter because whatever we say about the professionalism or otherwise about the people conducting the interviews, the end result is to mangle, misquote and misrepresent at least two or three of the testimonies that we know about that went to the confidential committee.

“Now the miraculous outcome of all of this is that, despite the commission destroyed the original tapes, made by the confidential committee, 550 people’s tapes, the back-up tapes were discovered to be in existence…”

Crowe: “As far as we know, from the tapes I’ve heard, I’ve heard two tapes now, in neither case, is the witness told that ‘these tapes are going to be destroyed‘. They’re asked if they agree to have the thing taped as an aide to accuracy for the report, I mean, I quote it in the [Dublin Review] piece for Caroline but they’re not told the tapes are going to be destroyed. That was kept a secret. Now if they can prove, they still have the back-up tapes, that a large number of people were told this, despite the fact that we have two who were not, then we’ll have to look at it again….”

Previously: The Language Of Scholarship

Mother Of All Leaks

‘Time Is Not A Luxury That Many Survivors Have’

11 thoughts on “To Mangle, Misquote And Misrepresent”