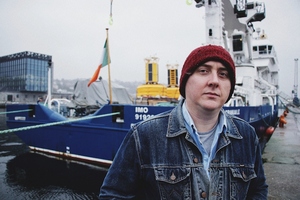 Who said we can’t have nice things?

On the gentle summer breeze floats the first single from John Blek’s forthcoming album On Ether & Air. It’s a thing of beauty – imagine if Bread‘s David Gates had been from Cork.

“Chance encounters and some fortunate timing led to me being able to work with some of my favourite musicians. Getting people with such unique playing styles involved went a long way in defining the sound of On Ether & Air and creating an album of which I am immensely proud.”

On Ether & Air will be the final part of John’s ‘Catharsis’ project, a four-album exploration of themes of the sea, the earth, the embers and the air.

The video for Long Strand is equally compelling. The press blurb explains:

“The stunning video for ‘Long Strand’ was directed by Barra Vernon and stars dancer Foxy P. Cox. It plays with the industrial setting of the video versus the natural setting of the song, juxtaposing the two to great effect. The natural flowing movements of the dancer interpret the curling flames and rolling waves in the lyrics.”

Nick says: Do the Strand.