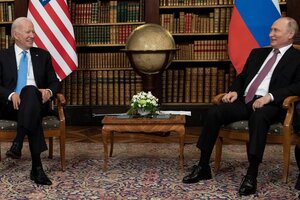 The first meeting between US President Joe Biden and Russian leader Vladimir Putin has concluded after nearly two hours.

President Biden called Russia a “great power” and appeared to nod when asked if he trusts Russian President Vladimir Putin, sending the White House into damage control amid a chaotic introduction to the leaders’ high-stakes meeting.

The head-nod from Biden happened as US reporters and Russian security got into a near-brawl before him Wednesday in the stately Villa de la Grange in Geneva. The shoving match drowned out most of Biden’s opening remarks and appeared to confuse the 46th president as he sat near Putin.

Biden seemed to put Russia on equal footing with the US, saying in barely audible remarks, “We’re two great powers” — before nodding after a reporter asked if he trusts the Russian leader.

Biden and Putin face off in Geneva amid elevated tensions (NewYorkPost)

The Unvaccinated ‘Will End Up Paying The Price’

4 thoughts on “Vlad The Manspreader”