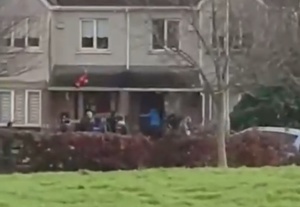 Last December George Nkencho a young black man with a history of mental illness was shot and killed by the Gardai in the front garden of his Dublin home.

Shortly beforehand it is alleged that George had punched or slapped a worker in the local shopping area and it’s also claimed that George was carrying a small knife.

Regardless of those alleged crimes we believe the use of lethal force by the police was grossly disproportionate and that the 12-15 Gardai present should have been able to subdue George and arrest him.

The video above was recorded from the green opposite the Nkencho family home and captures the 5 shots which killed George. The video has been slowed and captioned so that the sequence of events can be better understood. (The video should be viewed on a larger screen like a laptop or tablet if possible.)

The BBC have covered the story in a Newsnight piece and have broadcast the same video though not with slow motion or with captions.

The Nkencho family’s grief was compounded by a torrent of racist and libelous misinformation about George which was systematically organised to justify the police killing and as a means to sow division between our communities in the aftermath of George’s death.

The Irish state like many others has a very poor record in holding the police force to account and so we believe that if the Nkencho family are to receive justice in this case it’s crucial that this video is widely viewed so that large numbers of people understand exactly what happened to George.

‘Another Way Would’ve Been Found’

“He Needed Help, Not Bullets”

‘Brutalised By The Irish State’