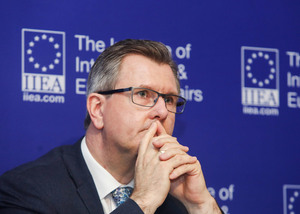 Sir Jeffrey Donaldson in Dublin in 2013

“I will be speaking with the Prime Minister at the earliest opportunity to emphasise that it is not realistic to expect stability when every unionist representative in the devolved institutions opposes the Northern Ireland Protocol.

“The government and those who claim to be protectors of peace and stability, must step up and deal with the protocol in a manner which respects the constitutional and economic integrity of the United Kingdom.”

Cone Of No Shame