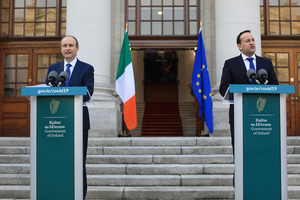 Michael Portillo’s investigation into the origins of the Northern Ireland conflict (“Partition” RTE 1.) led to a jaw-dropping moment in Gerry Adam’s office when Portillo realised, and to his credit, could no longer deny, (due to his own research and Adams’ input), that the conditions for the conflict had been set and inflamed by his own party, the Tories, in the years preceding the foundation of the Northern Irish state.

Yes, Partition and conflict came to you from the same people who brought you Brexit. It was a denouement as surprising and shocking as the ending of The Sixth Sense.

A couple of days later, Leo Varadkar, clutching at straws in the aftermath of a sobering poll drop, with abysmal political timing (given the panic and volatility of unionism), “envisioned” a united Ireland in his lifetime.

This apparently in a naked attempt to appropriate what he must have perceived as a Sinn Féin populist idea, apparently not realizing himself the irony that he is Ireland’s very own Tory, more at home with the privileges and ideologies of Johnson and Cameron than the largely socialist intent of Ireland’s founding fathers.

Later in the week, at the Fine Gael Ard Fheis, the Tánaiste said that Ireland’s home ownership is 65%. He then set what appeared to be an ambitious goal for 70% ownership, to be achieved by building 40,000 private homes a year until the target is met.

But that 65% stat is a fiction, apparently deliberately under-estimated so that the target of 70% can be more easily achieved.

According to the Trading Economics Survey, Ireland’s home ownership is closer to 70% most of the time. It is currently 68.7%, which is considered low relative to the highs of 81% during the boom, before re-possession became a reality and everyone realized that when push comes to shove the banks own most of the homes anyway.

Rounding that 68.7% up to the nearest unit, home ownership in Ireland, according to the Trading Economics Survey for 2020, stands at just under 69%, just 1% short of Varadkar’s target of 70%, which is the norm for home ownership across Europe.

But what’s 1% among those who can so casually drop 4% to suit a rigged argument? In other words, the Varadkar goal of 70% has already been more or less achieved, and will be achieved with or without FG input.

The Tánaiste is basically pulling a salesman’s tactic, leaving himself room for certain success. Ultimately, it doesn’t matter who’s in government, the stats will still deliver a home ownership level of in and around 70% anyway.

To sell the idea of private home ownership versus social housing, the Tánaiste insisted that private home ownership is in the Irish DNA. This again is pure sales patter. This angle he’s working is no more than an exploitation of fear of homelessness, which may well be part of the Irish post-colonial DNA, due to hard lessons learned in the 19th century: lessons of eviction, condemnation, exclusion and starvation that still rightly spook the ancestral memory.

What we are perhaps looking at here is the cynical exploitation by an elite, of native post-colonial distress. Cynical because the exploiters are privileged and educated, in a system where education costs are also pricey, leaving the same elite with an almost exclusive hold on knowledge too.

They are not ignorant. They know well what they are doing when they deliberately mislead people with fake arguments and stats, in an attempt to sell over-priced private houses, by undermining the concept of social housing through the cynical manipulation of psychological anxieties embedded in the culture.

At a general election a number of years back the curtain slipped when a Fine Gael handler told a reporter that they’d “frighten the shite out of them” (the electorate) in the run up to polling day. They are capable of this level of cynicism.

The real idea behind this type of sales pitch is to divide people, in order to exploit prejudice between those who own and those who rent, in much the same way as the Tánaiste sought to divide low-paid workers from unemployed workers with the welfare cheats campaign, when the reality was that they were all basically the same people, just in different current relationships to jobs.

Here he seeks to divide property owners and non-property owners, with his mean-minded naming of social housing as “free”, the attempt being to saddle a target group with the label of parasite, while many would be more inclined to view the tax-dodging billionaires and the vulture landlords as the real parasites, if we must resort to labelling people like that.

The very group the Tánaiste is serving by trying to sell this idea that home ownership is in our DNA, like as if we’re wild fowl programmed to fly South in winter, and simply can’t help ourselves.

The whole 65% thing is a distraction from Fine Gael ideological opposition to the concept of social housing.

Even those boasts you occasionally hear about Ireland having the highest home ownership in the EU and so on, are just small statistical gradations of point zero percentage points. The reality is that home ownership across the entire EU averages in and around 70%, fluctuating by one or two percent here and there on an ongoing basis, with occasional outlier anomalies.

Same As It Ever Was

One of the shocking images you often see in films about World War II are the dead bodies on the streets of the Warsaw ghetto. Yet we have a housing system that often produces similar results, and many people apparently believe this to be “normal”, if not “deserved”.

How is homelessness, low wages, evictions, rack-rents and the condescension of the privileged any different from the 19th century exploitation the founding proclamation was designed to free us from? It’s a fair question.

This is the climate of social Darwinism Varadkar in particular has been cultivating since he arrived on the scene. A climate of moral bankruptcy, exacerbated, as Fintan O’Toole recently discussed, by the collapse of Church authority.

And what do you actually have to do to own a house in Ireland’s rigged system? Well, mostly, given the miserable wages and the outlandish house prices, you have to agree to be exploited by that rigged system for your entire life; while being in hock to a bank which will, as we have seen, at the first sign of a downturn in fortune, ditch you out onto the side of the road to be condemned by many of your countrymen as a ”loser”.

The neo-liberal plan is quite simple: Fib, Fog, Divide and Privatise. The pity is that a lot of Irish people, even after Trump, are still quite partial to that bitter, mean-minded diet.

You can hardly blame people, though. Who in their right mind would want to be at the bottom of Varadkar’s social heap? If someone has to be there, so the logic goes, let it not be me.

13 thoughts on “Eamonn Kelly: This House Is Not A Home”