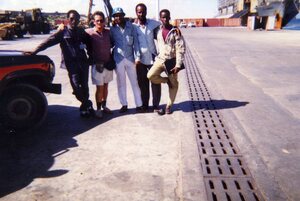 It’s 3 o’clock in the morning. I think it is likely time I went to bed, so I turn off the speakers, put my PC to sleep and pick up my phone to make the weary trek upstairs.

And then I hear it.

The sound of rain on my porch. A gentle patter of drops on the peculiar shape of the small edifice attached to my home. It stands out among the others, all of whom have gentle tiled gables above their porches. Mine is a spiky plastic mongrel jutting into the heavens.

When it rains heavily from one direction (not the band, just the northwest) a small drip occurs just above the original front door. I bought one of those mats that is esupposed to gather up water. On a bad Irish Winter day… let us just say Winter wins.

Also the house is getting old, and one of the window’s double glazing turns into an aquarium if the rain and wind are from a different direction. One day I will replace them.

So I sat on the stairs, not quite up to my favourite halfway point. I think I figured out part of why it is that. When I buy stuff, and some is for upstairs, as I come in I take it out of the bag and plonk it on the stair at about shoulder height. It usually, but not always, goes up on the next trip up to the heavens. I have caught myself sitting there, holding this new addition to the house and sitting on the stairs wondering: why did I buy this again? Oh, hand soap, yep!

Don’t worry, I do not yet have dementia, I just like to lose myself in the moment. Like the rain. I love the sound of rain. I admit, most especially when I am inside and it is not, but the sound of it on the roof is somehow comforting.

When I grew up, my bed was in a peculiar place under the sloped roof of a dormer room. Flat roof on the top, and this strange angled alcove that an old army bunk could fit in. And about 10 inches above your head the rain would occasionally hammer, yet here you were, safe and dry. Sometimes, it was the lullaby that rocked me asleep. Maybe it will be again tonight.

I have lost count of the different types of covering I have sheltered from the rain under over the years. My favourite has to be corrugated iron sheets under a tropical downpour. So loud you cannot hear yourself think, it also cuts off communication. Sometimes, if you are having a lazy Sunday afternoon, it can be nice to sit on the veranda, sip a cool beverage and look out over the freshening land.

Most places I stayed in did rainwater harvesting, running a gutter to a large collection tank. Mostly used for cleaning, on a wet day the tank could be overflowing very quickly. For fun, we once did a quick calculation of the volumes of water coming down.

In school I used help with the weather station, and one rain gauge was a peculiar design of the teacher. It had a square funnel of almost a metre squared. He told us that 1 mm across a square metre produced a litre of water. So with a standard corrugated roof of about 30 square metres, filling the 10,000 litre tank was a doddle in a good downpour.

I guess my least favourite was in an older canvas tent, and rolling over in my sleeping bag to accidentally touch the wall of the tent, turning my sleeve into a gutter as the water came through and cascaded along my arm and into the sleeping bag.

But one good thing about a decent downpour where the rain is warm is, if you cannot hide from it, it teaches you that you are in fact waterproof. Going to college when it rained I would hunch my shoulders, turn up the collar of my inadequate coat and funnell rain down my back. I always seemed to be passing a big puddle when a car would go by, and trousers and shoes would squeak for all the day. Until I got my donkey jacket. Mostly OK, but shoes still squeaked.

One summer day, after college, I was walking up Georges Street towards Rathmines when the heavens just opened. I was wearing a light jacket, and a baseball cap. Quickly saturated, and with the kerb funnelling the water like a sluice down the road, the only good thing was the brim kept my glasses from getting too wet.

Realising that I was already past salvation and yet to reach the halfway point home, I decided to make the most of it. The shoppers huddling under awnings and in doorways were treated to the sight of a loony man careening up the street, doing a very bad impression of Singing In The Rain. More akin to the Morecambe and Wise version than the Gene Kelly, I assure you, and no umbrella in hand.

Once I got home and changed out, I realised that no bits had melted or dissolved away, and once dry, I felt strangely refreshed.

As a result, when on my first overseas trip, getting caught in the daily rains during monsoon seasons, when work could not stop, brought about my ‘uniform’ of jungle hat, polo-style t-shirt and shorts.

I got a pair of Teva style sandals to round out the look, which my brother brought from the US for me. Very comfortable, he actually got me the ladies ones. The two of us have similar sized feet, and he said the men’s sizes were way too wide and so were not snug. I must say, I really did not care, and I think they are still upstairs somewhere in a trunk or under a heap of other collected detritus of my life.

So as I wind down now, safe for another night from the raindrops beating gently against my window, I wonder what I will dream of, and will it involve singing?

The photograph above was taken in Mogadishu port, Somalia, in April 1993. From left to right is my car at the time, the one I repaired the radio in (reference a post many moons ago), my driver Mohammed, who really liked me because I repaired his radio. He also took my Bob Marley tape, but that was OK, I got a new one when I came home. Then there is me in my outfit, pre-sandals. This was how I rocked up to a Thai naval vessel to meet their Admiral on a semi-diplomatic event. As you can see, I had excellent colour sense. After a few days, my arms could match my polo.

Next is my field officer Abdulahir, who had to keep telling me to talk slower as he tried to translate. When I got excited, my rate of speech increased, and my Dad’s Cork roots would appear. In negotiations with stevedores, loaders, drivers and tallymen, this could be a problem for poor Abdulahir.

Beside Abdulahir is Mohamoud, our senior field officer and deputy of the office. I reported to him. Thankfully, he was very forgiving, and when I realised he had a passion for genealogy, we compared notes and found that the Irish clan system is very similar to the Somali one.

Finally there was our Convoyer [sic] Ahmed, whose job it was to accompany the shipments of food from the port to our warehouses. One was directly across the road from the entrance to the port, so we imaginatively called it the Port Warehouse.

7 thoughts on “Waiting For The Rain”