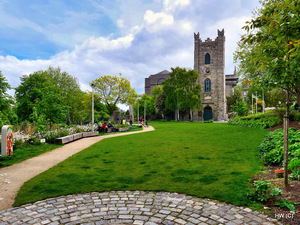 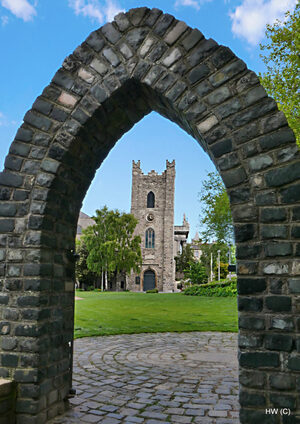 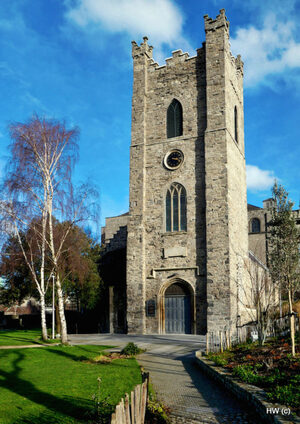 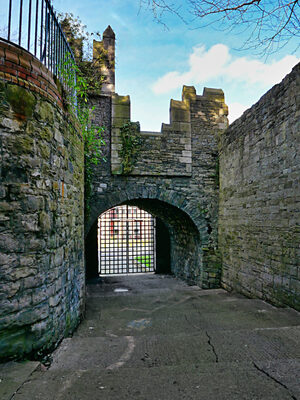 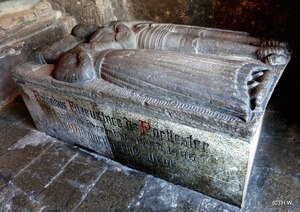 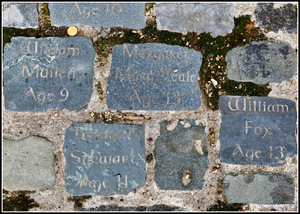 From top: St Audoen’s Church and Park; The Portlester Tomb; a Memorial to children who died in the 1916 Rising

The Dublin 8 area is probably one of the more varied historic areas of the city and St Audoen’s Church and park is one of its highlights. Located on one of Dublin’s oldest streets, High St. The church is still in use today as a place of worship and it is Dublin’s oldest medieval church.

The church is named after St Ouen (or Audoen) of Rouen (Normandy), a seventh century saint and it was dedicated to him by the Anglo-Normans, who arrived in Dublin around 1172 and they built the church in 1190. There is also good evidence that the site they built on was of an earlier 7th century church that had been dedicated to St Colmcille.

On the left side of the church medieval steps lead down to the only remaining gatehouse of the original Dublin City Wall or to “The Gates of Hell” but more about that anon.

In the 14th century and over the next 100 years the church was expanded many times as the wealthy and powerful made charitable donations, bought indulgences, had their own personal altars built in the hope they could pay for a safe passage through the afterlife. Six separate altars were set up in this chapel by various merchant guilds of Dublin, butchers, smiths, bakers, bricklayers and clothmakers. The altars were in constant use with daily masses offered, financed by the guilds and wealthier parishioners.

Sir Roland FitzEustace, Baron Portlester, served as Lord Chancellor and Treasurer of Ireland and he was a generous benefactor of St Audoen’s. In 1455, he added the Portlester Chapel, the ‘Chapel of the Blessed Virgin Mary’ at the east end of St. Audoen’s Church, it was then the wealthiest parish in Dublin. FitzEustace built the new chapel next to the nave, in thanksgiving for his surviving from a shipwreck nearby.

Inside the tower there is a fine fifteenth century memorial displaying life sized effigies of FitzEustace depicted as a knight, alongside his wife, Margaret. If you visit take note of the stylised sculpture at her feet, it is actually a small dog. I would like to think she had a cherished pet, though there is the possibility that the dog may represent a symbol of fidelity.

Over the centuries the church fell into disuse and disrepair. The tower itself was badly damaged on the 11th of March 1597 when an accidental but massive gunpowder explosion happened on the nearby Liffey quays, killing 126 people and destroying between twenty and forty houses all around it.

By the 17th century the number of Protestant parishioners had seriously declined and the few left were unable or unwilling to fund the churches restoration. In 1671 the Church of Ireland Primate, Michael Boyle, ordered the church to be closed but it was still used intermittently over the next 100 years.

In 1755 Reverend Cobbe, the rector of St Audoen’s decided to remove the old cross from the church steeple and had it replaced with a boar’s head adorned with a crown.  The Dean of St. Patrick’s Jonathan Swift was not impressed and was quick to pen the following barbed verse,

And placed in its stead what he worships – the Crown.

Avenging the cause of the Gadarene People,

The miscreant hath placed a swine’s head on the steeple;

By this intimating to all who pass by,

That his hearers are swine, and his church but a stye.’

By the 18th century and having only a small Protestant congregation to contribute to church funds, the church fell further into serious disrepair. Consequently, the roof had to be removed from the eastern end of the church. The church was reduced further when an eastern wall and window were constructed.

in the early part of the 19th century the roof of St Anne’s Chapel also had to be removed until the OPW refurbished and re-roofed it converting it to an exhibition space for visitors to St Audoen’s. Access for the congregation is now via the front door of the tower. Audoen’s tower also has the oldest church bells in Dublin that are still in use today with three of the bronze bells dating from the 15th century.

Inside the porch of the church mounted on the wall is the (Cloch an Áidh), the ‘Lucky Stone’, reputedly a 9th century grave-slab with an inscribed Greek Cross. There are many legends and superstitions attached to the stone. It is said to bring good luck and good health to anyone who touches it. The stone has an interesting history. Some archaeologists suggest it may have been a boundary stone removed from the very early Christian settlement where St Patrick’s Cathedral is located.

Most would argue it was really a grave slab of some now forgotten but venerated Saint. It was installed outside of St Audoen’s in the 14th century and anyone passing by up or down the medieval steps would be inclined to touch it for good luck. It was a popular attraction drawing passers-by to visit the church and contribute some donations.

In 1308-9, Dublin’s first public water supply, a marble fountain, was erected in nearby Cornmarket by John Le Decer, the Mayor of Dublin. Le Decer in a political act of self-promotion, had the Lucky Stone relocated beside the fountain so that all who drank from it would have good luck. It was a popular superstition to touch the stone, ” many of the humbler class of traders would reverently kiss (the stone) before venturing to engage in their daily occupations, being firmly convinced that it was endowed with supernatural properties’.

In 1826 The Lucky Stone was stolen by a group of country people and one of the many legends about it tells that during the theft the stone became heavier and heavier until the thieves’ horse and the wagon conveying it collapsed under the weight somewhere around Inchicore. The thieves were forced to abandon the stone on waste ground. Later, when stonemasons who were building a wall found it and raised their sledge hammers to break it to use as building material, the stone supposedly moaned and rolled away.

There was no record of its location until twenty years later where it was found in front of a newly built Catholic Church on High Street. Canon Alexander Leeper in the 1860’s then had the stone returned back to St Audoen’s and fixed to the interior wall to protect it from theft. In one of the many ghost stories associated with St Audoen’s, it’s said the ghost of the clergyman still walks the passageway to protect the stone.

About the “Gates of Hell” I mentioned earlier. Take a left at the front of St Audoen’s tower and you are now walking down the forty steps to “Hell”, a medieval short cut to one of the original city gates of Dublin’s medieval walled city. If you exit the gate on to what is now Cook St you are entering what was once a notorious area of brothels, pickpockets, taverns and otherwise unsavoury characters richly deserving the nickname of “Hell”.

So, in recent years St Audoen’s Park with its city walls dating from 1000 A.D. and its many features have been very tastefully restored. Both the park and the church are well worth a visit. In the park a number of archaeological finds discovered during restoration have been incorporated into the park’s pathways, the stone sets of a former lost alleyway, Keysar’s Lane.

The name Keysar is thought to come from a Dutch settler called De Keysar. However, in typical Dublin fashion, the laneway was given the nickname of “Kiss Ass Lane” because of its steep incline and the tendency for people to slip on it in icy and wet conditions. You will also find some medieval cobblestones and even some Georgian-era paving tiles.

Particularly poignant is a new memorial feature, dedicated to the once forgotten children who lost their lives in the events of Easter 1916 with their names now engraved onto stones mounted in the ground in their memory.