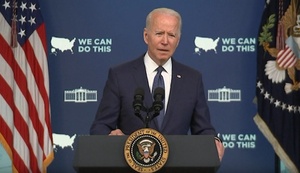 White House press secretary Jen Psaki told reporters on Tuesday that a door-to-door canvassing effort begun during the White House’s “Month of Action” in June would be part of the new effort to surge vaccination rates in states where the numbers of Covid-19 vaccinations are lowest.

Ms Psaki said that the campaign would include “targeted, community-by-community, door-to-door outreach to get remaining Americans vaccinated by ensuring they have the information they need about both how safe and accessible the vaccine is”.

MP Scott Morrison openly speaks of introducing a 'vaccine passport' which will be attached to the 'Government Digital Wallet' so that what you buy, what you sell and what you do is attached to his wallet eventually phasing out cash. Australia is becoming communist China.

He’s wearing a face mask for a radio interview. Heaven help us. This is a level of irrationality we have never before witnessed in our lives. https://t.co/XAXmbeRQ4e

The Unvaccinated ‘Will End Up Paying The Price’

No Pleasing Some People