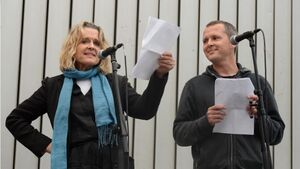 There was an interesting exchange in the Dáil between Richard Boyd Barrett and taoiseach Micheál Martin concerning the mysterious subject of actors’ residuals.

Actors’ residuals are agreed percentage royalties due to the actor when a show is re-screened elsewhere. They are how some American actors become amazingly rich. American actors in television’s early days were getting screwed on residuals, unaware of the potential money to be made on repeats of shows sold all over the world.

But how could they have known? The industry was young and all this came about through the development of recording technology and television, allowing for repeats and re-screenings of old films on TV.

Following a series of greater and lesser strikes by various film employee unions, the most significant being in 1960, residuals became a standard part of actors’ contracts in the US, handled by their agents and union representatives.

Take It Or Leave It

It would appear that Irish actors are now in a similar position as American actors were in the 1950s and 1960s. But there are a couple of very important differences. Film companies operating in Ireland are attracted here by government subsidies and tax breaks, while the actors themselves are, as I understand it, represented by their own agents and by Actors’ Equity, whose main focus seems to be theatre, not film and television. Plus, of course, everyone is wise to residuals by now, and the big money involved.

It appears then, that on the question of residuals, some producers may be factoring in the non-payment of residuals as a further financial enticement to produce film and television in Ireland.

In a way, Irish actors, like low paid workers the world over, are being short-changed as part of a deal to generate employment that, if not accepted by the worker, will simply lead to the production companies taking their business elsewhere, as per your by now standard globalisation model.

Richard Boyd Barrett described actor’s being faced with take it or leave it propositions: if you insist on residuals, you won’t be offered work; and he reported that some actors who had challenged this take it or leave ultimatum had since been black-listed by certain production companies.

But in terms of representation of the actors’, Boyd Barrett took the view that because of the public money subsidies and tax breaks to film companies under section 481, that it was the government’s business to intervene in ensuring proper pay and remuneration for workers, who in this case happened to be actors.

Micheál Martin’s response to all of this was deflationary. He didn’t quite say it’s time for actors to get a “real” job, but he as good as implied this, segueing wonderfully into the now widely discredited concept of employment activation, which he insisted “does work”.

There are reports and statistics that show employment activation doesn’t work. Nevertheless, the taoiseach insisted it does work and offered some vague anecdotal observations about people having “happy” outcomes.

For those who don’t know, alongside the private companies contracted to provide employment activation, are also contracted private companies measuring “satisfaction” ratings. Most workers in these schemes are on the back foot and tend to respond positively to leading questions like: How happy would you describe yourself? Very happy, extremely happy, or deliriously happy?

The reason employment activation doesn’t work is because late-stage capitalism is not creating employment, it is creating profits by short-changing workers, and customers, the environment and often, the very concept of truth; and anyone or anything else it can short-change to ensure a profit for its investors.

In this particular case, the taoiseach, rather than standing with actors in facing up to the production companies to rightfully claim residual deals on their work, is saying instead, that actors will have to be prepared to submit to employment activation and all the consequent market mumbo jumbo that it spins about “re-skilling”.

Employment activation, delivered by private companies who receive a payment for each individual “processed”, is quite literally the commodification of unwanted labour, from which corporations can turn a profit by inserting themselves into the public money stream created for “retraining”.

The assumption that supports this siphoning of public funds by private entities, is that the flaw is in the individual, and not in a system that empowers and enriches corporations at the literal expense of individuals. In this case, the flaw is considered to be in the actors in choosing a profession that’s not “normal”.

The Taoiseach’s promotion of activation “services” when asked to support arts workers at the raw end of corporate short-changing, makes it clear that he actually doesn’t have a concrete vision for the future of the Arts. That fundamentally, he appears to genuinely believe that arts work is not “real” work. He’s not alone in this. Lots of so-called “normal” people think the same. But they’re not making leader decisions.

He did offer a conciliatory suggestion that there might be a “social dialogue” about this. But that’s hardly what is needed when you are looking at a situation where people are being black-listed for essentially questioning contractual arrangements worthy of Flywheel, Shyster and Flywheel.

The question for the actors is: If the government won’t represent them, who will?