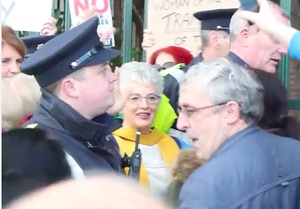 Given Katherine Zappone’s appointment, by Fine Gael, to be guardian of our free speech, I offer this poem which I wrote on her appointment to a Fine Gael led cabinet in 2016. The above picture is of her at Jobstown in 2014 unsuccessfully trying to protect Joan Burton’s right to free speech from anti-water charges protesters.

Underestimate not a woman of my agility.
I once used one of my better handbags
to carry the King’s distressed head home,
when those without expense accounts, or subtlety,
rudely separated it from the rest of him.

I’ll be Minister for this, that,
anything you want; will gladly
spend my days looking into
slurry tanks, or inspecting
military parades, if the price is
adequate, which we both know
it will be.

When I visit her as part
of the celebrations to mark
the two hundredth anniversary
of the potato famine, I plan
to give her majesty a small
but exquisitely formed
figurine of me, tastefully
painted toe to head
in gold leaf. If we both live
long enough, which I now
expect we will,

for me to tell her about the time
I handed the Tsar a hanky
when all his battleships were sunk
and the families of the sacrificed
reacted surprisingly badly.

"This is a 13 or 15 grand role . . . I don't think we want to make a huge mountain out of a molehill here either"@EmerHigginsTD on the Governments appointment of Katherine Zappone to a UN role after reports that the Taoiseach was blindsided by the move. #TonightVMTV pic.twitter.com/ihkuCSXpxG