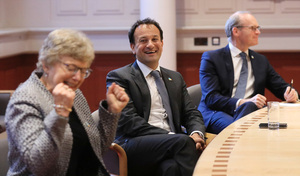 @LeoVaradkar rejects accusations of cronyism.
He says Zappone approached Mr Coveney to create the role.
He accepts her name should have been been flagged to the Taoiseach and it wasnt and he and Coveney accept that

Tánaiste denies Zappone got envoy job due to ‘cronyism’ (RTÉ)