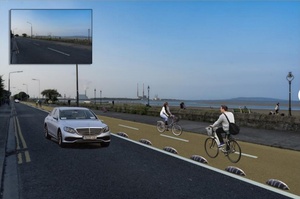 The Strand Road cycle route has been blocked by the High Court. Strand Road is predicted to be below sea level by 2050. Environmental legislation is being used to block measures designed to prevent environmental disasters.https://t.co/gAQNe3hNYA

“This judgement has the potential to make delivery of cycling projects even more time consuming and difficult in the future. It’s imperative that we urgently reduce our dependence on cars if we are to meet the target of halving our emissions by 2030. Local authorities and state agencies are in the process of rapidly expanding cycling infrastructure using the €360m/year of funding allocated to walking and cycling projects by the government. We call on Minister for Transport, Eamon Ryan TD, to introduce legislative amendments to empower local authorities to use the funding urgently and efficiently as originally intended.”

“I was looking forward to cycling to work, around Sandymount, to shops, etc., but simply do not feel comfortable to do so on non-segregated lanes, and I know many people in the area who feel the same. This is such a shame for Sandymount residents and, really, for active travel across Ireland.”

“We’re bitterly disappointed by this outcome. It is a lost opportunity to trial an amenity which would have enabled people of all ages and abilities to safely and comfortably cycle along the seafront on Strand Road.”

“We’ve seen a similar amenity in neighbouring Dún Laoghaire, the Coastal Mobility Route, become an overwhelming success over the past year. It has enabled more people to cycle and it has reinvigorated the coastal communities through which it passes, including Blackrock, Dún Laoghaire and Sandycove.”

“Strand Road is a vital missing link in a coastal cycle route around Dublin Bay. Dublin Cycling Campaign will continue to engage constructively with all stakeholders to find a safe and attractive cycling solution on Strand Road, which remains a hostile environment for anyone who wishes to cycle there.”

“The Social Democrats are strongly of the view that Dublin City Council needs to stay the course and appeal this decision. Strand Road is predicted to be below sea level by 2050. Opposition to measures that reduce carbon emissions is misguided and does a disservice to the local community.

“Moreover, this kind of safe, segregated infrastructure is vital to ensuring increased cycling uptake from women and children. The proportion of women who cycle in our city compared to men is only 27pc, according to the last census, and the numbers of children cycling to secondary school is now at only 2pc, according to information provided in recent months to the Oireachtas Climate Action Committee. Blocking the Strand Road cycle lane is a regressive move which ill serves our city.”

How Sandymount Strand Would Have Looked To Leopold Bloom

The Doors Of Sandymount