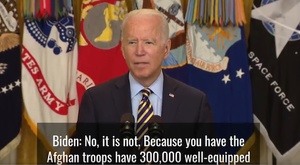 Biden’s political and geopolitical rivals rush to exploit his mistakes, the true magnitude of the crisis can only be judged in the human tragedy of a people again subject to Taliban persecution. And a failure to fulfill the now apparently near-impossible tasks of evacuating all the Afghan translators, workers and fixers on whom the US relied and who now face Taliban retribution would besmirch America’s conscience and global reputation.

…Biden remained at the Camp David presidential retreat in Maryland on Monday morning, amid rising pressure for him to address the nation on the crisis. Senior national security officials appeared on television news shows in an apparent effort to counter the impression that the administration had been badly overtaken by events.

After video emerged of Afghans flooding the tarmac at Kabul airport, deputy national security adviser Jon Finer admitted that the airport was crowded with “desperate” Afghans wanting to leave, but insisted on CNN’s “New Day” that the US had the forces in place “that are necessary to bring stability and security to that airport.”

Biden’s national security adviser Jake Sullivan deflected the blame for the scenes of chaos in Kabul, saying on ABC News that the President would speak to Americans “soon.” And he blamed Afghan armed forces for folding in the face of the lightning Taliban advance.

“(Biden) thought the Afghan national security forces could step up and fight because we spent 20 years, tens of billions of dollars training them, giving them the best equipment, giving them support of US forces for 20 years and when push came to shove, they decided not to step up and fight for their country,” Sullivan said.

Hi, @WhiteHouse, can you please explain why the clocks above the television show Standard Time rather than Daylight Savings Time? Moscow will not be three hours different than London until November 7, 2021. This isn't a pre-March picture that's Photoshopped, is it? https://t.co/Ykv5QVT1ca