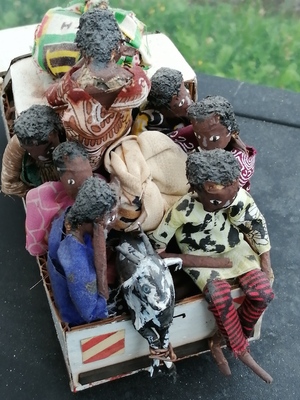 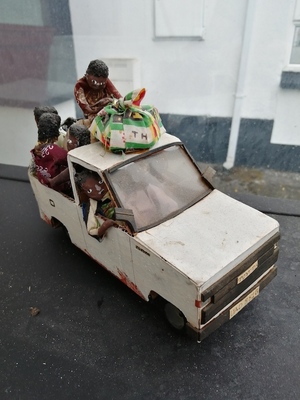 A model of a Toyota Hilux pickup. ‘This model is from western Uganda,’ the author writes, ‘where a local craft shop makes them from recycled goods. The wheels are the caps off photo film tubes.’

I got a note through my letterbox a short while ago. From the lovely people who previously tore up the roads around my town and caused my ceiling to collapse, creating a concatenation of events that resulted in me getting a new bathroom suite, they are due to start ‘Reinstatement Works’.

A detailed note, it comes with a lovely map, colour coded to help you understand when you will be most inconvenienced as they once more tear up the road, this time to put everything to rights.

With the impeccable timing of the last few weeks of freedom before the children of the estate return to school, they should have started along the avenue of my estate on Monday. Preliminary forays were made on Monday and Tuesday as companies who had done private works during this period, including installing gas from the mains line, rushed in to complete their own ‘reinstatements’ before the main event begins.

Little Slightly is due to arrive in about ten days, and it will be bang smack in the middle of these works. I let her know, and she laughed. We think that they are trying to make her feel at home – or at least that is how we will look at it. She lives in Wisconsin, just south of Milwaukee. The Land of Lakes, they only have two seasons there: snow and road works.

As we chat while she drives home from work (handsfree, honestly! Wisconsin police are worse about that than the Gardai) she interjects with commentary on the ability of other drivers and the sudden appearance of road works that were not there this morning. It makes for an interesting insight to her character, and some nice, long conversations.

But it got me thinking about the many different roads I have driven down, sometimes agog as new vistas opened before me, sometimes in boredom as the ‘commute’ happened again.

Whatever people may think about Irish roads, they are really quite good. We have one of the largest averages of kilometres of paved road per capita, and can get nearly anywhere in the country on a hard surface. While I admit freely that some suffer dreadfully from low maintenance and depthless potholes, these are for the most part getting fewer.

When I started driving, I recall that the way that you knew that you crossed into Northern Ireland was the quality of the road surface. Some may argue where the exact border is, but the relevant county councils on either side knew perfectly where their authority to pave and line the roads ended.

Similarly, when the motorways started appearing, if you wanted to know how far it was, they had this funny rule where they could only maintain the roads to a high standard with the European funding making the motorways possible for two kilometres on either side.

Then you were back to bone shaking potholes made possible by inadequate funding and council workers breastfeeding their shovels as their junior colleagues piled steaming tarmac into water filled potholes. One truck later, and hey presto! loose tarmac across the road and a wider, deeper pothole!

Most African countries do not have the wherewithal for such networks and, for many, once outside the main routes you are onto soft surface roads. Many are murram, which is a very durable surface for such conditions, but does require maintenance. I only know of one in Kenya, but I am sure there are others, but I once visited a school for how to make and maintain these roads.

A huge area, it was a scattering of holes, piles of murram, to one side the section for powered machinery, and to the other for making roads the old fashioned way, by hand and shovel.

Together with our agency’s chief engineer, we hoped to improve a road out to a number of villages we supported in order to allow them better access to markets. All too often on mud roads major ruts would develop in the rainy season, becoming hard as rock in the sun of the dry season. Black cotton soil is about the worst for this, being a gelatinous goop that any vehicle will struggle through in the wet season, to elongated erratic mini canyons when baked in the equatorial sun.

As a result, often overloaded pickups with produce from the villages would overturn on these tracks of hardened mud, sending the passengers clinging to the sides and sitting atop the load already straining the limits of the pickup’s capacity in every direction. Sadly, all too often some passed away from injuries and trauma. We hoped that a better road would be safer, while some of our teams tried to explain load limits and basic road safety, but to little avail.

Murram roads, though, can be fun in one way. Lovely and smooth when first laid, after a while they develop corrugations across the road, perpendicular to the direction of travel. These are slightly different to feel under your tyres depending on which side of the road you drive on. As they develop like miniature sand dunes due to the passage of vehicles, they have a slope up in the direction you are going, and a fairly steep, if short, drop on the other side.

Strangely, this can mean that they are less annoying when you drive on the other side of the road, and so often you see vehicles approaching, each on the wrong side, before moving into their own lanes and passing each other, before again returning to the other side.

These serrations are interesting, caused by the wind of the passage of the vehicles pulling the lighter sand and dust up from among the pebbles of the road surface. They apparently occur at some harmonic of the average speed at which cars and pick-ups and busses and trucks go past above. I was told that if you hit the right speed, you no longer feel them. This average must be quite high as I have often been driven at what I would consider unsafe speeds, and no harmonious silence of the wheels.

I think my favourite stretch of road was an unfinished section of an interconnector in Kosovo before the war and NATO bombings. At the time, to drive from the capital Pristine to the southern town of Prizren, you had to head out the road towards what is now North Macedonia to the town of Ferizaj, or Urusevac in Serbian, and turn south. This added up to an hour to the journey, for all the roads were of good quality. But they were narrow, and in some sections climbing and descending mountainous areas, quite twisty.

So an interconnecting road closer to Pristine was being built, and would easily take that hour off the journey. But other matters had intruded, and the budget for finishing it was not available. Brought to the point just before the final surfacing was to be made, it was a rough but quite passable shortcut for vehicles with good clearance. We often used this stretch to teach drivers new to 4×4 cars how to handle them. While the extra and consistent power is great for powering along, they also come with high centres of gravity, and are quite easy to overturn if not careful.

This stretch was also the local lover’s lane, where the youth of the regions would flock to get out from the watchful eyes of their parents for a bit of back-seat canoodling, sometimes even before the sun went down. From some you could hear the strains of whatever song was considered popular, played at a volume that must have been ear shattering inside the car if I could hear it above the sound of my Land Cruiser’s large diesel. But it was fun one night.

I had travelled south to Prizren, and was returning late back to Pristine, where I was based. The car was being driven by my colleague, who was learning and gaining experience before she could be cleared to drive alone. We were late, and the sun had gone down, and it was a lovely bright almost full moonlit night. I decided we would chance the shortcut, with both the thought of giving night driving on rough road experience to my friend and also to get home a little quicker, as it was Friday night. The driver was a lovely lady who is a sister to me to this day, and still the only person to ask me if her ‘bum looked big in this?’ It didn’t, and she still has those jeans and they fit.

Along one stretch we saw the line of cars, and knew we would soon be on the main road. We decided to have a little fun. This stretch of road was very good, and the moon very bright, so in a fit of insanity and divilment we stopped and turned off the lights. After letting our eyes adjust and ensure we could still see the road clearly, we started off past the cars with the engine revving high but in low gear and speed, and roaring like some mad demon from hell.

Our chariot of noise was a Toyota Land Cruiser we called Betsy, and we sailed past in the dark like a howling hound of hell. As we passed, we saw heads popping up, and in some cases interior lights coming on as the lovers struggled to figure out what had disturbed their cuddling. I do hope it did not deter any from getting back to whatever it was they were doing, but I also hope they still remember that night.

By the way, if you do want a roaring engine, none of this four cylinder 2.5 litre turbo nonsense like in a Land Rover. Once the turbo kicks in you get plenty of power, but the engine whines. A six cylinder 4.2 litre straight diesel like the Land Cruisers growls at low revs and howls at high, providing an even gradation of torque throughout with no sudden burst as the turbo decides to come along and play. They are great vehicles, and while definitely not the world’s most environmentally friendly, they were designed for a purpose and environment, and we, and are, perfectly suited.

They are also a proverbial pain to clean with a single bucket of water at the end of a day on wet muddy roads.

Waiting For The Rain