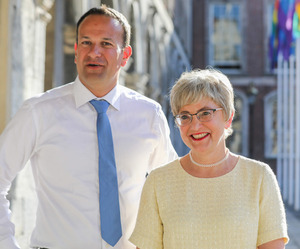 New statement from the Tanaiste on his text messages and freedom of information requests: pic.twitter.com/fz5gDIBftS

Interestingly, the Tánaiste’s department previously responded to an FOI request from myself and clearly stated there was no records of any texts between Leo Varadkar and Katherine Zappone about the Merrion event, which we now know was not the case pic.twitter.com/BIilYEQqHw

Fianna Fáil TD for Offaly and Foreign Affairs committee member Barry Cowen has said the Taoiseach needs to address the issue regarding the “content” of the texts shared yesterday by Leo Varadkar over a UN role for former minister Katherine Zappone.

Speaking on RTÉ’s Morning Ireland, he said that while he accepts Micheál Martin has said that no texts should be deleted if it contains Government business, he believes he needs to “acknowledge” the content of those texts.

He said he did not allude to the “startling information” within the texts, “the amount of knowledge that was known by the parties involved” and that a contract and agreement had been reached with Ms Zappone while no one else was aware of it.

Yesterday: From The Piglet