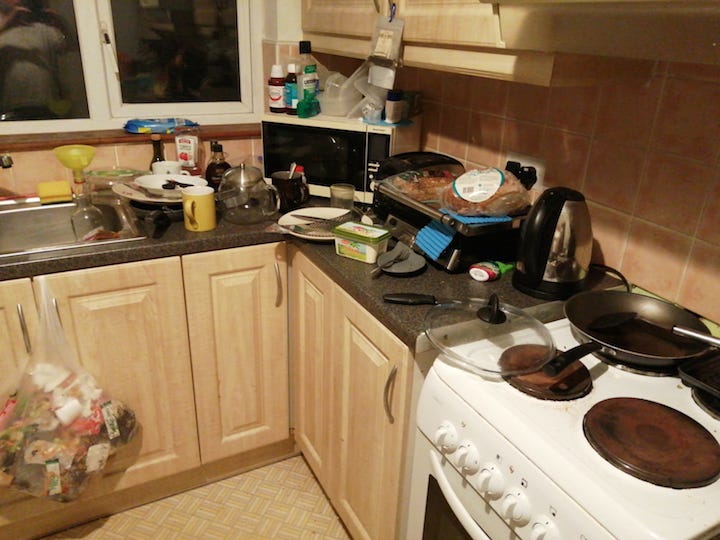 The way I grew up, we really soaked the bread until the milky eggy goodness was absorbed, fried at high heat in butter and eaten with delight with salt. As I grew older and more experienced in egg related bread dishes, I discovered that others merely dipped the bread in an egg mixture, fried on low heat with oil, and had it with syrup.

Any which way, when it was being prepared, you got out of the way and gave the cook their space. And it was never a washing-intensive meal. A whisk, a dish in which to whisk, a pan, and the plates and cutlery with which to serve to awaiting hungry people.

Little Slightly has been doing most of the cooking since she arrived. I think my dishwasher loves her – it has seen more use than I ever gave it. And she may not have noticed me noticing, but she does something I do: she pats it, and says thank you when it is done. It stopped working for a while when I was away, water was all over the floor, and my rug turned furry. I came home, a little TLC, and all is good. But I do need a new rug.

The funniest bit for me, though, is that she has discovered Irish sausages. I am not sure if I should stop buying them, but every time I do, all get cooked. A comment is made that those not eaten will be saved for the morning. Hah! I am enjoying her delight at little things, like the fact they are connected in a string. They call them links in the US when in this form, but she never knew why. She is experimenting with piercing, or not piercing. Fork or knife, one or two, and one side, or over and back. Low and slow cooking, or fast and furious. All are cut and presented for my approval for cookedness, as she is not used to how pink they are. Better safe, in my opinion, but her instincts are good.

She is still trying to figure out rashers. American bacon is different, and we did find some ‘American Style’ nearby. Many packs were bought, and the freezer is having a field day, but she is still not sure about rashers. They have, however, been adjudged as better in omelettes, scrambled eggs (it was supposed to be an omelette, but I wanted too many ingredients) and mashed potato. but for just bacon, the thinner slices and different fat content of ‘American Style’ currently wins. As I write this, another pack is gently sizzling, so I think I know what my midnight snack will be. Onions are being chopped to be added to the morning omelette: not all of the bacon will be eaten tonight. I have yet to have the conversation that such delights were an Irish innovation!

Cheese is another delight. Being from Wisconsin, a land renowned for its dairy produce, and with major teams named for the product, she wondered at the local shop. ‘You have how many cheddars?’; ‘What’s Emmental?’; and wonder at triangles of spreadable. Ours actually is!

But it is the flavours that are getting her. Whatever we think, ours are far more natural, fewer enhancers and additives. The colour of the egg yolks is a source of wonder and a little bit of research on the internet. I have not told her, but my sister in law has promised some of her home grown free range eggs. Wonderful, tasty, and with shells you may need an axe to crack! Real food, not plastic.

We visited the homestead, my mother’s home where her brother still remains ensconced. He had a wonderful, 150 year old book of Irish Melodies that he gave her. She wants to learn Irish music, so this was a delight for her. I have since not been sure if it was a good gift. I have listened to her complain about the different style of writing music, the wondering at what instrument was used, and the occasional 2 am clarinet recital of one of the pieces that had caught her imagination. I may be the only parent who has to bang on his kid’s door and yell: ‘Turn that classical music down!’ Shup, Elgar, I want to sleep!

I am also enjoying the fact that a messy house appears to be genetic. I went to a lot of trouble, and through a lot of slightly disparaging in a family way family comments on whether or not I would be ready in time. Hmm. My couch is a no go area. Like, it was before, but my stuff and I knew where it was. Now? At least I can get to the door past it. The bedroom I cleared remains safe from my prying as I see the floor when I climb the stairs. Even I am not that brave. Or is that stupid? I will stick with brave.

Waterworks remain a mystery. She cannot get her head around the immersion. So it is the boiler. So long as we know if she left it on or not when we leave, all is fine :-) I did have to explain, though, that the big red switch for the shower was so it would actually work, and the boiler was not needed for the hot water. She is not used to water not being centrally supplied by the furnace in the basement. Which is good, as I do not have a basement.

Since she has arrived, we realised in a conversation with her cousin that I have only cooked dinner twice ( claimed three times, but was assured ordering Chinese takeaway does not count). I know she is up by the sounds in the kitchen, and the dishes piling up for the dishwasher to be happy again. I know she is talking with her boyfriend by the looks when I enter the living room and looks follow me, even when neither is talking.

But I did learn one thing. From years ago when I had a place I could cook when I went over, I taught her how to make potato cakes in the morning with left over mash. There is a container in the fridge with some uneaten potatoes, and I am under orders to show her again, now she may remember how.

I guess Irish style french toast and potato cakes can wait. In the meantime, a slice of toast with bacon has been presented to me. Bon appetit!