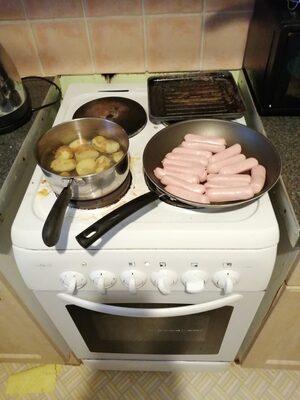 Around Midnight last night at the Bemused family kitchen

We set Little Slightly loose on the Kildare shopping scene with her cousin Glitter Slightly. Shoes were bought, foundation secured, and sunscreen for their upcoming trip to Spain – all organised without request for permission and certainly without remorse.

She arrived home, having again decided my drive is too narrow, and bags were taken from the car. Being the caring father, I offered to help. I was given the bag for the fridge. In which 2 packs of a pound each of sausages was secreted, nearly at the bottom. Once my chuckling subsided, I put them in the fridge.

I was asked if I wanted some mash. I had not realised this was merely to be a side to the whole pack of sausages slowly cooking beside them. At least she eats them skins and all!

I came downstairs at nearly midnight, and she paused, fork halfway to lips, and asked if I wanted any sausages. There were six left. Now there are two. Who knows what the night will bring?

Should I mention that she bought the sausages having gone into Dunnes to get American-Style bacon as per Know Knots‘ recommendation in the comment on my column…Let this be a lesson: your words have consequences. In this case late night snacks :-)

A Death In The Family