Following the meeting, Pope Francis said: “Today I didn’t just meet a man, a President. I met a wise man of today. I thank God that Ireland has such a wise man at its head.”https://t.co/odHYgDqaQo

So, meeting this guy is OK?

President Higgins has hit out at former Taoiseach John Bruton’s comments, saying that he is wrong in his interpretation of the Constitution.

Says it is up to Mr Bruton if he wants to withdraw the remarks, and he says that they suggest that the President behaved improperly pic.twitter.com/j5L1oK9OrD 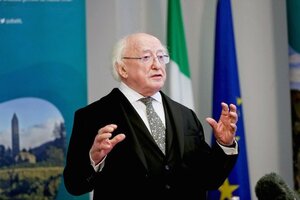 Celtic Supreme Commander Michael D Higgins, President of Ireland Except For Small Bit At The Top, speaks to reporters in Rome, Italy 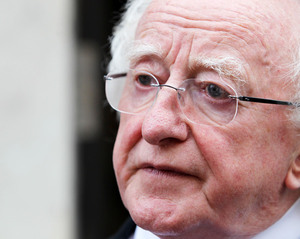 President Michael D Higgins has defended his decision not to attend a commemorative church service in Armagh next month and does not intend to revisit the decision, a spokesman has said.

He told reporters that what had started out as an invitation to a religious service had, in fact, become a political statement.

President Higgins said the title of the event made it inappropriate for him to attend as it marked the centenaries of the partition of Ireland and the formation of Northern Ireland.

President Higgins said he wished the service well and, in a reference to Queen Elizabeth, said there was no question of any snub intended to anybody.

President says it would be ‘inappropriate’ to attend Armagh event (RTE) 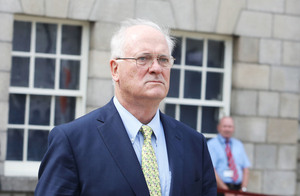 Former Fine Gael taoiseach John Bruton said Mr Higgins should attend the event and appeared not to have sought the advice of the Government as “he is obliged to do under the Constitution”.

Mr Bruton told BBC Radio Ulster on Friday morning: “If he had fulfilled his obligation under the Constitution, which is to take the advice of the Irish Government on this matter, they would have advised him that he ought to go.

“He seems to have some concern that it is in some way taking note of the existence of Northern Ireland as a separate entity.

“But the reality is that the Irish people in the Good Friday Agreement, which they voted on and approved in a referendum, accept the present wishes of the people of Northern Ireland to maintain the union, until that is changed.

“So, in accepting an invitation to an event which is simply marking the existence of Northern Ireland for 100 years, the President would have been acting in accordance with the wishes of the Irish people.”

Mr Bruton said “it appears he didn’t seek the advice of the Government which he is obliged to do under the Constitution”.