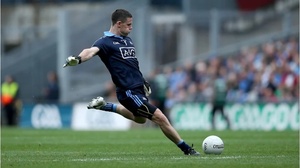 It’s 10 years today since Stephen Cluxton nailed that score. Who would have thought what was to come? A Decade of Ring a Ring a Rosies! Certainly not I. Sixteen years waiting for it, there were times I was sure that I’d never see another one before I headed for the Planet’s departure lounge.

My son asked me, as an innocent 12 year old, tears streaming down his face after we were beaten in the replay to Kerry in 2001, if he ever would see Dublin win an All Ireland (he had no real memory of the 1995 win). Ah of course you will, I said consoling him, the same way you would tell your children about Santa Claus.

My other kids were on the list for Prozac at the time also, such was the depression that overhung our household that day. At least myself and Caroline had seen Santa Clause come down the chimney on a good few occasions but you desperately wanted your kids to share those same type of emotions.

It would be 10 long years before Cluxton’s point sailed into the blue Dublin skies to bring back that emotion as utter unadulterated delirium wrapped itself around the people of Dublin. Once the drought was over, glorious salt tasting rainfall poured and poured on to our cobbled streets to heal our previous wounds. And we drank and swallowed gaily from its overflow.

As a City, with all its problems, its divisiveness, its different classes, its hussle and bustle of separation, we now gelled into one mass identity band. As success followed success it was us and them now as the country threw spears and arrows from all directions in an attempt to penetrate our gallant band. Some of the most intelligent people in the Country suggested lunar type solutions to strengthen their assault but no matter how hard they puffed and puffed they just could not blow our Dublin House down.

Our band carried themselves around the country like Paragons of Society, displaying all the humility of our ancient Celtic Warriors of old as we stepped out of the Celtic Tiger era and all its greed.

No matter how bad life was going we always had our Dubs to fall back on. A time to bury all the stresses into the waste bin of our brains and bask in the glorious football in front of our eyes. And when the battle was over we drank ourselves merry in song and dance, all the time enflaming the true ethos of our ancient Irish culture. Business people all over the country vied for our wallets and Kerry nearly had another Civil War when Tralee and Killarney gnawed at each other for our pockets.

Other counties laid out the blue carpet for us and as soon as our pockets were emptied reverted to type in disliking us again. However not all did so and cross county relations were forged through all the spears and arrows with the Tyrone Brigade standing out from the rest.

The final curtain came down four weeks ago. The cast looked somewhat tired and forlorn. We know not what the future does hold. What we do know is that it was an unforgettable journey, where the most romantic of novelists would find it hard to write the script.

Children who witnessed it will go on to tell their children and the journey wil be retold in pubs and clubs over and over again for many years to come. For this capital city, a city whose streets and laneways can tell of its many historical scenes, its tragedies and melancholies, its bravery and glory, the reign of this glorious Dublin Football team will now be added to its long and winding saga of memories.

Take a bow, brave sons of Baile Atha Cliath.. We may never see your likes again.

Shay Connolly is a writer/songwriter, a Ringsend resident and a former Dublin Minor Hurler.

Kellie From The Block

10 thoughts on “As The Light Declines”