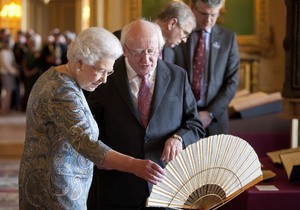 With any luck, the controversy over President’s Michael D. Higgins decision not to attend next month’s planned church service in Armagh to “mark the centenary of the partition of Ireland and the formation of Northern Ireland” will soon abate.

It is a row that does no one any credit, least of all those who claim the President has a missed opportunity to extend the hand of friendship to Unionism.

As yesterday’s Ireland Thinks/Mail on Sunday poll reported, a staggering four out of five of us believe that President Higgins is doing the right thing and for the right reason.

He is. But he has more than just popular sentiment on his side. This was not a decision made impetuously or in haste. As the President explained last week, he has been mulling over the invitation from the Church Leaders Group (Ireland) for several months. He shared his concerns with event organisers telling them that the event title was not a politically neutral and presented him with difficulties.

From these remarks it is evident that the President did attempt to create the circumstances to allow him to participate fully as President but, for whatever reason, this could not be done.

To lay the blame for this at the steps of the Áras as some have attempted, including former Taoiseach John Bruton, and the six Independent Senators who accused the President of scoring an “own goal”, is ridiculous.

While the President’s explanation should satisfy all reasonable and fair-minded folks, let me offer three more reasons why the President was right.

The first stems from an important speech made by the former Taoiseach Brian Cowen, back in May 2010. Addressing a conference in UCD on: “A Decade of Commemorations Commemorating Our Shared History”, Mr. Cowen set out the approach the Irish government would take to these commemorations, saying that being:

“…well prepared and carefully considered, should enable all of us on this island to complete the journey we have started towards lasting peace and reconciliation”.

He set out the principles the Irish government would apply to commemorating these significant centenaries. They included:

–        full acknowledgment of the totality of the island’s history and the legitimacy of all the traditions on the island that draw their identity and collective memory from our shared history.

–        recognition of the totality of the history of the period, and all of the diversity that this encompasses,

–        mutual respect central to all commemorative events and that historical accuracy should be paramount.

If these criteria had been applied to the Church’s planned October service in Armagh, then it is quite possible that a way could have been found to holding the event.

But having good intentions alone does not qualify as careful consideration, nor does meaning well do away with the requirement to fully acknowledge the legitimacy of all the traditions on the island.

The principles set out by Brian Cowen continue to inform the work of the Irish government’s Expert Advisory Group on Commemorations, based on its 2018 report which says:

The aim of commemoration should be to broaden sympathies without having to abandon loyalties… The goal of inclusiveness is best achieved, not by trying for an enforced common interest or universal participation, but by encouraging multiple and plural commemorations which remember the past while ensuring, as far as possible, that the commemoration does not re-ignite old tensions. [My emphasis]

Though the Government’s expert committee has been careful in applying these principles, as we saw early last year it was not always consulted or heeded by the last Fine Gael Government. Thus we had Justice Minister Charlie Flanagan’s ill-considered and poorly advised DMP/RIC event. That unnecessary debacle should also have been a salutary lesson for everyone – including those outside of government.

Which brings me to point two: Parity of Esteem. This is a key foundation principle of the Good Friday Agreement. Put simply, parity of esteem, means that both traditions treat the aspirations of the other with respect and acknowledge them as legitimate. The beauty of the principle is that is works both ways and requires neither tradition to deny its own beliefs or political objectives.

In practice, this means that nationalists and republicans have a responsibility – if not a duty – to listen to and engage with the arguments for Northern Ireland remaining in the Union in a serious and respectful fashion. The same applies to Unionism. Neither side is expected to abandon sincerely held viewpoints, political ambitions, or to stop being true to themselves.

As a republican I know that partition and the establishment of Northern Ireland are political realities that cannot be wished away. I also recognise that Unionism sees both partition and the formation of Northern Ireland as positive political achievements, but that does not stop me from knowing, from my perspective, that partition was a tragedy that has had disastrous consequences for both parts of the island.

I understand the pride that many in Unionism take in the foundation of Northern Ireland. I have no issue with commemorating its attainment. Why should I? It is a shared part of this shared island’s often sad history.

But, if those who are commemorating the establishment of Northern Ireland, which is itself the result of Partition, wish the President of Ireland to participate in that commemoration then there should be an explicit acknowledgement that the President represents those who believe that border led to a century of violence and sectarian polarization.

The third point is that not all Unionists are the same. President Higgins’ critics on this side of the border accused him of snubbing Unionists – as if Unionism was one big, united family.

The growth of the Alliance party, and even the Green Party, plus the early signs that the UUP under its new leader Doug Beattie MLA may be gaining some ground by carving out a more moderate and secular Unionist niche, suggests that Unionist voters are less homogenous today than in the past.

This is not to say that Unionists no longer believe in the Union. They do, and strongly – but outside of the constitutional issue, today’s Unionism is less conservative, hardline and inward looking than it was. In the 2016 Brexit Vote 34% of those who self-described as Unionist voted to Remain in the EU, as did 64% of those who identify as ‘Northern Irish’.

Where Molyneaux and Paisley the then leaders of the UUP and DUP could bring a quarter of a million Unionists out on the streets to oppose the Anglo Irish Agreement in 1985, recent protests against the Protocol attract crowds of a few hundred.

This does not stop some desperate Unionist politicians – especially from a DUP struggling to cope with falling poll numbers – from contriving to seem offended by President Higgins decision. As the SDLP leader Colum Eastwood MP pointed out, their comments do not advance the cause of reconciliation:

“…particularly when it comes from quarters that have downplayed and degraded the importance of all-island cooperation for two decades”.

Hopefully, important lessons will be learned and we can move on.

We have known the best way to approach these events since Brian Cowen set it out back in 2010. But we have also seen how being nonchalant, or presuming the response of others, can turn the respectful remembering of our shared history into a painful reliving of it.

6 thoughts on “Derek Mooney: Three More Reasons Why The President Is Right”