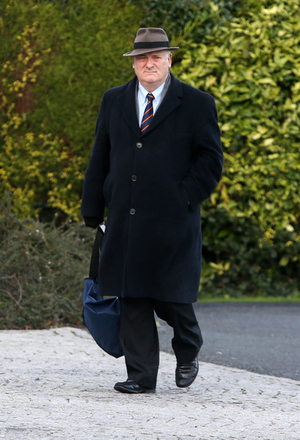 Just when Fine Gael had cleared the no-confidence vote in Simon Coveney, John Bruton, demonstrating how long a week can be in politics, burst from retirement to pick a fight with President Higgins.

It all came down to a word, as so many things often do. The word in this case was “partition”, used in such a way as to suggest that its inclusion in the invitation sent to the president of a republic opposed from day one to partition, wasn’t entirely innocent.

Later, after the President’s response to that word and to his being misaddressed by the DUP leader, Jeffrey Donaldson, and after social media let loose with its own words like “snub” and “boycott”, and after John Bruton hauled the hefty “unconstitutional” to the party, realising too late that it was the wrong word, with constitutional experts popping up to correct him; and after an Irish Times columnist took the President to task for failing to practice patience on the road to peace, and after the President assured everyone there was no snub intended to the Queen, no boycott intended, no insult intended towards the churches organising the event; after all this it emerged that the President was simply annoyed with the DUP.

Those who said the President should attend the event were coming from a place of “diplomacy”, another word. Diplomacy is when you resolve to meet the other side halfway.

But sitting dangerously next to “diplomacy” is the word “appeasement”.

Appeasement arises when the other side, to test the elasticity of your diplomacy, steal a little bit more than what was agreed upon. If the bit extra is ignored, for the sake of diplomacy, you enter the hazardous would of appeasement, which is the political equivalent of interpersonal bullying.

The problem with appeasement is deciding where to draw the line. Before you sell out Czechoslovakia, or after?

The President mulled over the poorly worded invitation and its accompanying forgetfulness concerning his official title, for close on six months, no doubt aware of the diplomatic implications of declining the invitation, before finally deciding it was time to draw a line.

As President Higgins noted, the actual border, strictly speaking, didn’t come into effect until 1925, whereas the commemoration was concerned with the centenary of the establishment of the Northern State in 1921. Whoever had decided to include the word “partition” in the official title of the event had apparently reached a bit, as they say.

Though a spokesperson for one of the churches involved in organizing the event claimed that the inclusion of the word “partition” in the title of the event was intended to appeal to nationalists, to ensure that the event would have something in it for all persuasions.

Yes, it must be clear to everyone by now that nationalists just love that word. Like honey to bears.

The President’s later remarks suggest that he regarded the inclusion of the word “partition” as a deliberate political choice, a kind of word trap. But President Higgins is the wrong person to be attempting to trap with a cleverly placed and politically motivated word trap. Language is his specialty.

If he had attended, for the sake of diplomacy, as suggested by John Bruton and others, his attendance would have had the effect of compromising the integrity of the presidential office and would have set off more emotive words elsewhere.

The inclusion of that one emotive word in the official title of the event may even have been a kind of prank, a practical joke of sorts. One that betrayed not only a disrespect for the President of Ireland, but also a disrespect for the learning and intelligence of Michael D. Higgins.

The irony of this is that this cheap shot has had the effect really of undermining the dignity of the commemoration of the founding of the Northern Irish State, by using that commemoration as an excuse to deliver a not very subtle dig at Southern institutions.

In the same paper where Jennifer O’Connell was happily scolding the President for his diplomatic “failure”, Fintan O’Toole wrote an interesting article on our relationship with the questions pertaining to a united Ireland and the use of the Irish language, wondering were these aspirations just a form of “virtue signalling”.

While a majority of people are in favour of the Irish language, hardly anyone bothers to speak it. O’Toole then wonders might the same apply to the idea of a United Ireland? A situation where a majority are in favour, in theory, but who may find the reality not much to their liking.

His conclusion is that we haven’t had an honest discussion among ourselves about the North, and that a majority of people seem to have sentimental attachments to what are essentially abstract romantic notions of a united Ireland, without really examining the reality.

For instance, once you introduce the idea of taxes to fund such an entity, to keep the North in the style to which it’s accustomed under empire, (you might have to buy them a nuclear submarine), not to mention the possibility of an FFG DUP coalition government, and a giant bonfire in your backyard every 12th of July, with an effigy of yourself on top, the actuality of a united Ireland immediately looks a little less attractive.

Eamonn Kelly is a Galway-based  freelance Writer and Playwright. His weekly round-up appears here every Monday.

Eamonn Kelly: The Week That Was