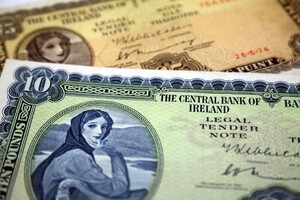 A documentary following the lives of two women; one born in Ireland, who became the face of America’s ten-dollar gold coin and the other, born in the USA, graced the first banknote of a newly independent Ireland.

Lady Lavery (top) was born in Chicago of wealthy Irish parentage. Her maiden name was Hazel Martin. She was chosen by her husband, Irish artist John Lavery, to be the face of ‘Caitlín Ní Uallacháin’ representing Ireland when he was commissioned to design the new punt banknotes for the Irish Free State.

Mary Cunningham was Irish, she had emigrated to America from An Charraig in the Donegal Gaeltacht. She was selected by the famous sculptor Augustus Saint Gaudens to become the face of ‘Liberty’ dressed in Native American headgear on the most controversial gold coin ever minted in America. Augustus Saint Gaudens was also Irish, he was born in Dublin in 1848, the son of a French shoemaker, Bernard Paul Ernest Saint-Gaudens, and Mary McGuinness, from Co. Longford. They emigrated to America when he was six months old.

For Your Consideration: Saol Faoi Shráid

Behind The Blue Door