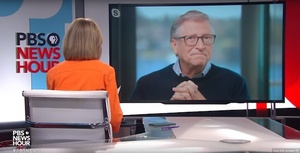 Judy Woodruff spoke to Bill Gates about ‘vaccine equity’, climate change and his meetings with deceased  financier and underage sex offender Jeffrey Epstein (@10.54). From the interview:

Woodruff: “You had a number of meetings with Jeffrey Epstein, who – when you met him 10 years ago – he was convicted of soliciting prostitution from minors. What did you know about him when you were meeting with him, as you’ve said yourself, in the hopes of raising money?”

Gates:  “Uh, you know, I had dinner with him. I regret doing that. He had relationships with people he said, you know, would give to global health, which is an interest I have. Not nearly enough philanthropy goes in that direction. Those meetings were a mistake,” he added. “They didn’t result in what he purported, and I cut them off. You know, that goes back a long time ago now. There’s – you know, so there’s nothing new on that.”

Woodruff: “It was reported that you met with him over several years, in other words a number of meetings What did you do when you found out about his background?”

Gates: “Well, you know, I’ve said I’ve regretted having those dinners, and there’s absolutely nothing new on that.”

Woodruff: “Is there a lesson for you or anyone else looking at this?”

Gates: “Well, he’s dead, so, uh, in general, you always have to be careful, uh, and, you know, I’m very proud of what we’ve done and very proud of the work of the foundation. That’s what I get up every day and focus on.”

For The Man Who Has Everything

Some Splainin To Do