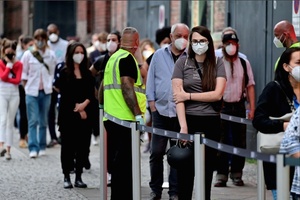 A vaccination centre in Berlin, Germany on Monday night

Germany will stop paying compensation to unvaccinated workers who are forced into quarantine by coronavirus measures as it is unfair to ask taxpayers to subsidise those who refuse to get inoculated, Health Minister Jens Spahn said on Wednesday.

The rules, which will be implemented by the governments of Germany’s 16 federal states, will take effect by Oct. 11 at the latest, Spahn said, confirming the details of a draft document seen earlier by Reuters.

…..Critics have said such rules would be equivalent to a mandate for COVID-19 vaccinations because many workers cannot afford to stay at home without pay.

Germany to end quarantine pay for those without vaccinations (Reuters)

Here’s Looking At You, Kidney