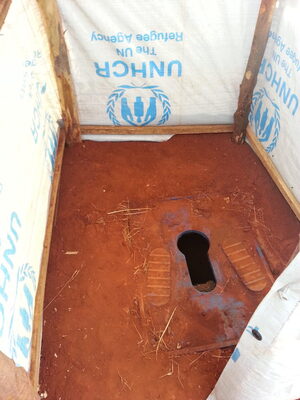 An emergency latrine at a camp for refugees in Northern Uganda

In my family we have a common expression when we visit. After the initial hellos are done, you ask “Can I do a Nuala?” and head for the bathroom. This is because our lovely aunt, sadly now departed, used to drive all the way from her home near Roundstone to any of our houses. In the days before motorways and even the good roads of today, this was often an eight-hour non-stop drive, and certain matters became pressing.

Over the weekend, Little Slightly and I went to visit my sister, who was hosting some of her grandkids. Wonderful wee ones, one had never seen me at all (my fault) but I had to ask the question. With five quizzical looks, they only got more so when my sister simply said ‘Under the stairs’. Been a while since we were together, but some things do not age. Or age well, if what Little S told me later is anything to go on. Never mind, this was family chatter. I let my little lady drive. It was interesting, but she made no mistakes and we got there safely.

Anyway, while doing the needful, I was struck that once again we had a new facility to let my daughter wonder over. No stranger to different loos, she had been in 4 houses since she arrived and all four were different. And it got me thinking of all the different facilities I had had to use over the years. For many of those years, putting in simple sanitary home and camp use places to go was what I did. I have more photos of toilets of various types in various stages of construction, destruction and collapse than I likely have of my family.

But over the past few days some new discoveries have been made. Old family photos are coming out. I grew up not knowing about many of me or the rest of our family, though I remember some being taken. My Dad loved taking ones for slides. There are advantages to this: they cannot be easily trotted out to embarrass you in front of your girlfriend, or worse, your fiancée. But the con is that if your Dad knows you are coming, out comes the slide projector, up goes the screen, and with curtains closed that embarrassment is now 6 feet high and 8 feet wide, and the neighbours could probably see the reverse image through the curtains. Thankfully needing the lights off meant blushing could be hidden.

Little Slightly has been going over old photos of our family. In fact, she has had ones shared I had not seen before (it appears that not being in the snap chat group does not help. Parents are not allowed, I think). I have pictures of her everywhere, many taken by her grandfather (Papa) who is a wonderful professional photographer. Problem is I had darker hair then. Not sure how to answer the question “Did Mom cause that?” regarding the grey, too many variables. And she is astounded every day. Given my comment about the Little one herself and tweezers, I am almost afraid to tell her that her darling mother used wake me up by plucking the first grey hairs from my beard. Like mother, like daughter, in that respect.

I was also reminded of our wedding photos. As Papa was a central character in the wedding ceremony, his services were not possible. So he told us not to do anything, leave it to him. He researched, and eventually gave us a short list. He had interviewed the top ten photographers in Ireland. Now, I did not know they had rankings – they do, and it is really important. Turns out Papa is quite important in these circles, and his requests had weight. We were given a short list of those we should go see, and who would be acceptable. They were ranked too.

We went to one, a really lovely man, and it turns out lives just down the road from my home town, almost a neighbour. Always wanting to support locals, we visited him. And he was incredible. We were shown samples of his work, and my soon to be bride, daughter of a serious photographer, went over his portfolio with a fine eye. In the meantime, he and I were having fun at all the puns and expressions, while he was still very professional. We of course did the whole ‘do you know’ as we were almost neighbours. Just to be clear, we did.

Anyways, Papa arrives along with the various entourage for the event (we arrived separately. I must one day tell the story of filing for the wedding and other ancillary events. Another time ). He meets this gentleman we had chosen. We really liked him, but did not like the second, so just went and said we are not going further. This guy was great.

Turned out he used the same main camera and film Papa did. Big plus right there. Irish photographers do not do much airbrushing with their shots, they prefer to use light and shade, aspects, and such, and this man was (and having looked at his site, still is) a genius. And as he lives only a few miles from the site of the wedding, he did not charge any travel fee.

So Papa hands him a bag of many rolls of film and says “When you run out, ask me for more.” We ended up with 872 photos of the wedding, and the party, not counting the ones that Papa took the next morning before our departure on our honeymoon trip. At some point the photographer became a guest. He was not one of those obnoxious ones that tells you to stand here, go there, abandon the kids, and such. Indeed we have many wonderful ones of ‘the kids’ (who are no longer kids) from that day. He was truly a joy to know. One of my fun memories is stopping him in the late ‘evening’ and asking him how he was doing.

Sporting a digital camera that if I could afford I could probably retire on, he beamed and said he was having a great time. I asked him about the camera: having been given permission by Papa, he had switched to digital (autofocus was his excuse) and took advantage of our free bar, and free bus back home. The image I have is of him dancing to Mack The Knife with the camera over his head, and suddenly turning and catching a photo of the guests.

But eventually the night turned to morning, and after a wonderful breakfast, Papa arrived and the formal shots were taken. There is a subtle difference between the style of shot, if I can say that, between the ones taken the day, and night, and early morning before, and the ones Papa took. The other day we visited my stepmom, and saw the montage we were given of all of us, centred around a shot of all of us together. But the best one, in my opinion, was that formal one, taken by Papa.I regret that without Little Slightly’s mother’s permission I cannot share it, but I love it.

But it was put in a special frame. This one had been in Little Slightly’s family for years. I am not sure how I ended up with it – many things seemed to be a moving company lottery thing – and while I love the photo, I do want to return the frame to the family it belongs to. My Little one and I will look at ways to do that while she is here. She knows people who know how to do this – and I like the fact that so do I, and both are family. All will be good! The frame will return home, and two families of photographers will have a form of bonding,

And if ever asked, I will do my best to show those photos, and definitely not the thousands I have of toilets!

Waiting For The Rain

6 thoughts on “Slightly Bemused: No Place For A Nuala”