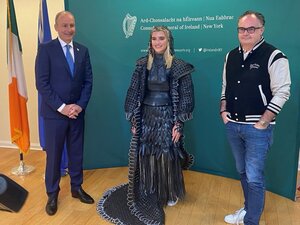 So many stories of kindness, creativity and spirit during the pandemic.

Good to renew those bonds and hear of the great work done, challenges faced, and hopes for the future. pic.twitter.com/Sy1hqJxlI9

A range of organisations attended the event from sectors including immigration, culture, business, education and the GAA.

During the meeting, Mr Martin praised the groups for their response to the Covid-19 crisis.

The project was supported by the Irish Government and the main beneficiaries were undocumented Irish people working in the hospitality and construction sectors who were unable to claim state or federal supports.