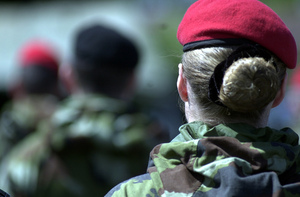 No fair-minded person could come away after listening to the RTÉ Radio One documentary, Women of Honour with a positive view of military management, writes Derek Mooney (above)

Whenever I have written about defence issues I have done so from the point of view that we do not properly appreciate the men and women of Óglaigh na hÉireann/The Irish Defence Forces.

Whether I was bemoaning our failure to treat defence as a political priority, highlighting the problems with retaining personnel, or lamenting the gross underuse of our Defence Forces on national cyber defence, I have often portrayed military management as being a hapless victim.

While my benign depiction of a military management doggedly doing its best in the face of an indifferent political and administrative system, is fair in the instances listed above, it is not always the case.

No fair minded person could listen to Kate Hannon’s compelling, but distressing, RTÉ Radio One documentary, Women of Honour, and come away with a positive view of military management.

Listening to the documentary was difficult, but it is essential listening for anyone with any interest in Irish defence matters.

Hearing former members relate their ordeals of rape and sexual assault was harrowing, but then hearing how their senior officers and adjutants responded when told of the attacks, was enraging.

These senior officers did nothing. But, in doing nothing they became accessories. Their failure to act against the perpetrators just re-victimised the victims.

It has so many echoes of the sexual harassment scandals that rocked the Canadian military in the late 1990s and again last year. Scandals that exposed a systemic culture of harassment and assault of female military personnel.

Katie Hannon directly references the most recent Canadian #militarymetoo controversy in the documentary’s opening minutes. Katie tells us how a radio report of what was happening in Canada encouraged the former defence force members who comprise the informal Women of Honour group to retell their stories.

They heard how the Canadian military justice system had revictimized the victims and recognised that was what happened to them.

They heard how the “the hostile, sexualised and hyper masculine culture” within Canada’s military system was allowing perpetrators to continue with their careers but leaving victims unable to come forward, and they thought: me too.

Katie’s documentary catalogues a spectrum of failures that ranges from unacceptable behaviours contrary to Defence Forces values and discipline, to ones that are simply criminal, including sexual and violent offences performed by individuals.

But the documentary is not just the tale of a few rotten apple offenders protected by colleagues and mates, it also documents many examples of systemic bullying, harassment, and discrimination.

It tells the story of a female air corps officer passed over for training and promotion. Having exhausted the internal arbitration and redress systems, including an appeal to the Minister, all of which found that there was no discrimination, she took her case to the WRC, the Workplace Relations Commission.

The WRC not only found discrimination, it recommended that these systems be updated before the end of December 2021, saying that:

“…it beggars belief that women should have been serving in the Irish Defence Forces for decades without the Forces’ systems and instruction ever having been appropriately updated to ensure they reflect anti-discrimination law as it applies to pregnancy and maternity”.

The Defence Forces has separate conciliation and arbitration and redress schemes designed to offer a fair alternative to the normal systems of collective bargaining enjoyed by civilian employees, but the schemes were never intended to operate to lower or outdated standards.

The schemes, which consist of the department on one side, and the two defence forces representative associations (PDFORRA and RACO) on the other, were established in 1991 to compensate for the fact that serving Defence Force members may not join a trade union, and thus have curtailed representation and support in the workplace.

Indeed under military regulations serving Defence Force members may not discuss any matter relating to their service with a public representative, which is why you usually see issues of army pay raised by groups organised by groups representing the partners and families of serving members.

If the schemes – that were supposed to deliver enhanced systems of arbitration and redress in exchange for surrendering the right to workplace representation – are not updated to reflect the workplace entitlements enjoyed by others, then the concordat has not been honoured.

One way of addressing that wrong is concede the right of defence force representative organisations to associate or affiliate to ICTU along the lines set out in Section 8.5 of the July 2020 Briefing to the incoming Minister for Defence.

Speaking of that briefing, it is sad to note that it only mentions issues of bullying, harassment, and discrimination in the context of the IMG (Independent Monitoring Group). The IMG was established back in May 2002 and charged with overseeing implementation of the reforms recommended in the Doyle Report The Challenge of a Workplace.

As the Briefing notes, the IMG reported in 2004, 2008 and 2014. Each time it reported progress in culture change, but it also recommended further monitoring. The next IMG report is long overdue. It should have reported in 2019/2020. Though the Defence Department says it has prepared the terms of reference, two years later and the next IMG has yet to be even commissioned.

Though the IMG process has been constructive and productive, is it enough in itself? The Women of Honour would say no.

But was it as great as we hoped? Was it a sign that the problem had decreased dramatically or was it an indication that many cases were going reported?

That must be addressed, and it is why the Women of Honour’s demand for an independent inquiry, must be granted. It is a call echoed by former Army officer Dr Tom Clonan whose 2000 PhD equality audit of the Irish military, titled “The Status and Roles Assigned Female Personnel in the Permanent Defence Forces” lead to the Doyle Report.

The fact that the problem is widespread and not unique to the Irish Defence Forces should not dissuade the government from acting now. Yes, we could benefit from seeing how others address this problem, but we cannot wait for others to act.

Ireland has a deserved reputation not just for the professionalism and excellence of the personnel we send on UN mandated peace support operations, but for their compassion and understanding.

I know from my own experience of visiting such operations that the Irish men and women I encountered in Lebanon, Chad, Kosovo or Sarajevo had a genuine appreciation of why they were there.

They had no sense of superiority or disdain. They saw the people in whose country they were temporarily based, as equals. People whose basic human rights they were there to protect. I was hugely impressed by the real empathy I heard from troops on these missions, across all ranks, when we chatted informally over pints in the mess.

As they opened up, you could tell just how touched and moved they were by the poverty and pain they saw around them. They knew the high-end politics that had landed these regions in strife, but they focused on the devastation that war and conflict was bringing struggling communities and families. While the cultures and traditions may be different, they still saw families, ordinary men women and children, just looking to get by.

Indeed, one of the most under told stories of the Irish peacekeeping experience is the number of humanitarian and projects that Irish troops have supported and driven, in partnership with Irish Aid.

In Kosovo Irish troops helped renovate schools and provide outdoor sports grounds while in Lebanon they supported an orphanage in Tibnin and aided various elderly care and literacy projects. There are many examples elsewhere too.

These were not PR exercises, gauged to win over local trust, but examples of Irish troops, during their own free time, seeing what the local community needed, be it a hospital, school or clean water supply, and delivering it though individual effort and support.

So how do I reconcile a military culture that fosters these countless examples of caring and compassion with the one that disgracefully fails its own victims of sexual harassment and violence?

I simply cannot. The two accounts are real and true. Which is why, as I said at the outset, listening to the documentary was so difficult.

But the military will need political support and investment to do it – two things denied to it for too long. It must receive both, now.

Derek Mooney: NPHET And Government Must Get Behind The One Mask

Derek Mooney: There’s Only One Issue That Matters – And It Is Housing

3 thoughts on “Derek Mooney: Women Of Extraordinary Honour And Courage”