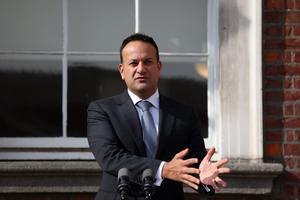 However, students generally come from the wealthier families who can afford the fees, since free education is also an impossibility in the neo-liberal world. Education has long since been monetised by the colleges, where educational attainments are often little more than tickets for inclusion in the working life of this, or some other nation availing of Ireland’s educated classes as a source of intellectual labour.

Always a Borrower Be

Then, when you factor in the idea of student loans, which, in the United States, keep some students in hock to banks for years, the way a mortgage might, but this for education, based on the assumption that an education will equate to a well-paid job, which, once attained, will easily cover the repayments on the student loan as well as funding a future middle-class lifestyle; the only word to describe this system is the Dublin street-word of being “rode” by all and sundry.

But not to worry, because as the Tánaiste reminded us during his time as taoiseach, young people, if stuck for a quarter of a million, can borrow the money from their parents, the same middle-class parents who are the traditional voting base for Fine Gael.

But, as the last election showed, the middle-classes may already have cottoned on to this cute system of double-dealing where their own children and, by extension, themselves, are little more than market commodities for neo-liberal FFG, where one person’s exploited teenager is also another person’ income.

The picture emerging in the phrase, One person’s rent is another person’s income, is the official validation, at government level, of the exploitation of the young by the established, whether that establishment is banks, landlords, educational providers or corporate employers, who can pick and choose the cream of the crop of each generation emerging from the colleges.

So when Leo Varadkar, or any politician facilitating big business and the profit motive, says that one person’s rent is another person’s income, what he is actually saying is that there is a lucrative system of exploitation of the young in place and, so long as I am in power I am not going to lift a finger to alleviate this burden from the young and their parents.

The whole deal then, the high rents, the shrinking job market, the pricey education, the student loans, the “market realities” that neo-liberals love going on about, is a kind of ponzi scheme where one person’s misery is another person’s wealth.

The fact that this system of exploitation impacts so heavily on the young, amounts to the actual realization into political reality of that old joke once used to describe a rough neighbourhood: they eat their young in that place.

Eamonn Kelly is a Galway-based  freelance Writer and Playwright. His weekly round-up appears here every Monday.

Eamonn Kelly: The Week That Was