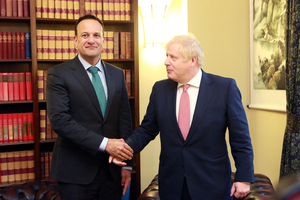 Shd we generally stick to deals? Of course. Sometimes break them? Of course. Just like the EU, US, China and every other state does. International diplomacy cannot be judged by the standards of a student duel, and lawyers are hired help not the masters

Leo Varadkar has warned countries around the world that they ‘shouldn’t make any agreements’ with the UK https://t.co/2Sh7Dtau1U

Ireland has warned countries around the world not to trust the UK because it is run by a “British government that doesn’t necessarily keep its word”.

Irish deputy prime minister Leo Varadkar urged countries to be careful when dealing with the UK because of the “bad faith” demonstrated in the government’s plans to overhaul a key agreement signed as part of the Brexit deal.

After agreeing to the Northern Ireland Protocol – part of the Brexit arrangement that means checks on some goods and services flowing between Great Britain and NI – the UK has continually sought to change aspects of it.

The EU, and swathes of British MPs, have been unhappy about the UK’s attempts to renege on the agreement, but comments by Boris Johnson’s former top aide Dominic Cummings appear to have caused anger.

‘They don’t keep their word’: Ireland warns world against signing deals with UK after Brexit (ITV)

18 thoughts on “As Far As I Could Throw Him”