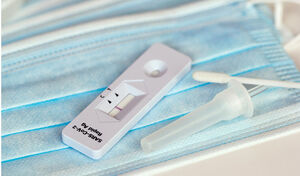 The Taoiseach has denied that the wait to see if restrictions are lifted on Friday is like “groundhog day” for those who will be affected by the Govt decision. Micheál Martin also said that he is a “strong believer” in antigen testing | https://t.co/UntGEWWq2y pic.twitter.com/H2P3Z3bm8R

chief scientific advisor to the Government Professor Mark Ferguson said that while antigen tests are useful and provide an extra layer of protection, they are “not a solution”.

Although widely used in many European countries, antigen testing has been discouraged in Ireland as public health officials said the tests should be used in strictly controlled settings and warned individuals might receive “inappropriate reassurance” from a negative result.

Covid antigen tests ‘not a solution’, advisor says as experts ask why Ireland an ‘outlier’ (BreakingNews)