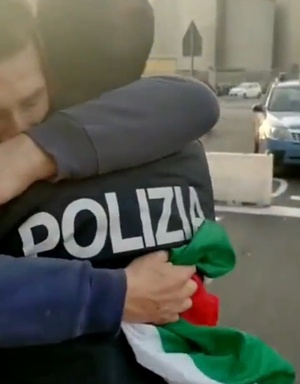 Blocking of the port of Genoa continues to the bitter end against the requirement of a health passport. This morning two policemen brought food and solidarity to the port workers: “Keep it up guys, don’t give up!” Stupendous.

Every single live webcam I checked for #Trieste showed the same empty square. When in fact it’s full of protestors.

“The past was erased, the erasure was forgotten, the lie became the truth”
– George Orwell #NoGreenPass #NoVaccinePassports pic.twitter.com/vIOrJ2qlPu