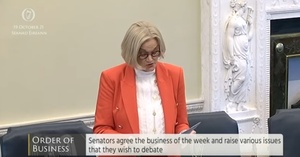 During the order of business, Independent Senator Sharon Keogan, elected by the Industrial and Commerical panel,  said:

I wish to express my grave reservations over our media and their coverage of the current state of Covid-19 in this country. Ever since the beginning of our vaccination programme, I have been constant in warning against the dangers of dividing society along the lines of vaccination status and opposed any legislation that encouraged it.

Imagine my disappointment then when I tuned into “The Pat Kenny Show” to hear the host demonising 17-year-old children for going to the cinema and referring to them as “vaccinatable”, as if a person’s worth is based on whether we can jab them and include them as a figure on the vaccine uptake tally.

Only a few weeks ago, we were all smugly patting ourselves on the back as articles about our great vaccine uptake flooded in. The unspoken message was that we were great, selfless and educated, unlike other countries, whose people were acting like savages. A fat lot of good that has done us as the Taoiseach has confirmed that our restrictions will once again live on past their supposed expiry date, while other countries with much lower vaccination uptakes are now more successful at suppressing the virus.

It is clear then that the current tone reflecting the position that the only reason we are having a problem with the virus is due to the individuals choosing not to get vaccinated is not only deeply insulting, discriminatory and harmful, it is also incorrect. This hunting around for some cohort of ordinary people to blame must stop and the responsibility for that lies with our media figures and outlets.

It was not even two weeks ago when we stood in this Chamber and were told that the continuation of Covid certificates past 22 October was unlikely.

At this stage, I cannot even muster any surprise that while the rest of Europe is up and running, the Government maintains its policy of fear and stifling caution, and rushes to move the goalposts once again.

The message after today’s announcement is very clear. People who are not vaccinated can and will be treated like second-class citizens. They will be dehumanised, labelled and cancelled unless they do what they are told. “Follow the science” means, “Shut up and do as we say.”

Earlier: No, You’re A Leper