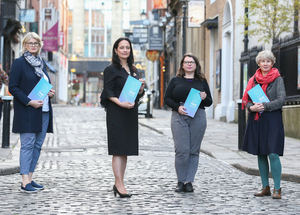 The launch of  Speak Up: A Call For Change Report, containing findings from a 2021 survey on Dignity In The Workplace in the Irish arts sector commissioned by the Irish Theatre Institute

The survey, with1,300 respondents, found that the…

‘… 70%, had experienced harmful behaviour and 53% had witnessed it.

The majority of those instances were reported to have taken place in the workplace.

The data shows the perpetrators were more likely to be men – 67% – and that women accounted for 42% of the reported incidences.

Freelance arts workers were also more likely to face harmful workplace experiences than those who are not freelance.

The majority of perpetrators were reported to hold positions of authority, and respondents reported that often, supports were not available to them and that where they were available, they were insufficient.