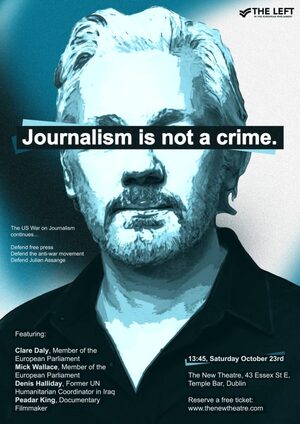 An “Irish Day of Solidarity with Julian Assange” will see a whole series of activities from Derry to Kerry in support of the imprisoned Australian journalist and publisher. It is organised by Free Assange Ireland in cooperation with other campaign groups and organisations for peace and justice.

Events include a forum at the New Theatre, Temple Bar with a panel that will include MEPs Mick Wallace and Clare Daly.

Lawyers for the US administration will go to the London High Court on October 27th/28th seeking to extradite Assange to the United States to face dubious charges relating to the US Espionage Act. If Julian Assange is extradited he will be sentenced to 175 years in prison. And although never convicted, he is nearly 3 years isolated in Belmarsh High Security Prison, London. What is Assange’s Crime? He revealed US war crimes that US politicians did not want the world to know.

“This Was Never A Fair Trial”