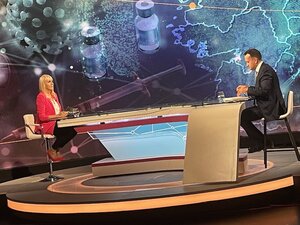 On Friday some clarity was brought to bear on the efficacy or otherwise of the vaccines, by Dr Anne Moore, senior lecturer in Biochemistry and Cell Biology at UCC. She spoke with Bryan Dobson on RTÉ Radio’s News at One.

Clearly this revelation got through to all the unmasked people queuing outside nightclubs during the week.

Meanwhile infections rose among hospital staff, curtailing health services, while a new delta variant is reported in the UK. Paul Reid called for booster shots for healthcare staff, while the taoiseach, speaking in Brussels, said that annual booster jabs, like the flu jab, may become the norm.

By week’s end the Tánaiste announced that the virus would be here “forever”. And forever, as the song says, is a long, long time; certainly, more than the previously predicted six months.

On Monday, the Claire Byrne Live show conducted a poll of 1,000 respondents (no details of demographics, class etc were provided) and asked them were they in favour of mandatory vaccination. The response was scary, but not really surprising for Ireland, which appears to have a long, unaddressed authoritarian thing going on. 46% were in favour of mandatory vaccination, the result arguably saying more about Irish people than it does about vaccination.

On the same show, journalist Joe O’Shea claimed to be shocked by this support for mandatory vaccination, but recommended an equally intolerant “compelling” of people by effectively locking them out of “our” society. Using vaccine certs as a tool, what he was recommending was a kind of siege on a target minority.

If everyone in a contained space was admitted to that space on the strength of a vaccine cert, does this ensure that the virus does not exist in that space? Joe O’Shea certainly seemed to think so, but, given Dr Anne Moore’s warning, things may not be so clear-cut.

A vaccine cert only proves that you have had the recommended vaccines, but doesn’t prove that you are asymptomatic. The vaccine doesn’t prevent transmission.

So, the collective possession of covid certs in a closed space does not indicate absence of the virus, or protection from the virus. The certs only provide proof that all present have been vaccinated.

The Tánaiste braved RTE’s Prime Time on Tuesday to face some pointed questions from Miriam O’Callaghan on his contribution towards the dismantling of the public health service, as minister for Health, as Taoiseach and as Tánaiste. To which the Tánaiste responded in his defence that the government has an arrangement with private hospitals to take on any overspill, should the need arise.

And, presumably, any over spill of extra public money that might be lying around, which would likely be much safer in private hands anyway.

A cynic might say that a qualified doctor overseeing the dismantling of a public health service is hardly in the spirit of the Hippocratic Oath.

On Wednesday, Senator Sharon Keogan called attention to the growing discrimination against those who have chosen not to be vaccinated. She described to the Senate the demonising of a minority being led by well-known media personalities.

On the same day Kathy Sheridan lost the run of herself in the IT and wrote the most amazing article, conflating people who haven’t been vaccinated with online trolls, violent insurrectionists and the murderer of the unfortunate David Amess MP. She was fired up on similar energy exhibited by Joe O’Shea on the Claire Byrne Live show.

But I must have imagined all that, because Áine Lawlor said on Morning Ireland that she hadn’t seen or heard any vilification of the unvaccinated.

If a tree falls in a forest and Áine Lawlor isn’t there to witness it, did the tree fall at all?

The Good and the Angry

The problem of the virus may be as much about how Irish people are handling the crisis as it is about how we are dealing with the virus. So far, we have been very self-congratulatory about the 90% uptake of the vaccine, which is the best uptake in Europe, even if the infection rate is the worst in Europe.

But it is as if there is a shadow side to this compliant behaviour. We like ourselves when we’re being “good” and agreeable, and we hate those, with apparent equal intensity and self-righteousness, who we deem to be not “good”, by failing to conform to current herd consensus.

The flaring tempers are eerily familiar. The spectre of angry, unhinged authority still ghosts around the folk memory, threatening with righteous anger all those who would dare to defy its power.

Eamonn Kelly is a Galway-based  freelance Writer and Playwright. His weekly round-up appears usually here every Monday (but owing to the Bank Holiday it was delayed for a day).