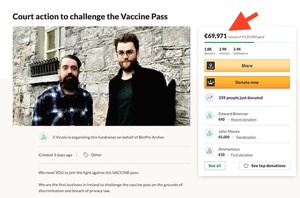 IL Vicolo has raised almost 70k to fight the vaccine pass system in the courts.

The Italian restaurant has refused to ask for digital certs and has been inspected on several occasions by the HSE as a result.

‘We were served with a Compliance Notice on 20th August and brought to the District Court on numerous occasions. Our business was even shut for two days in September following an application by the HSE for an emergency cessation order. On 4th October the District Judge ruled that he did not have to address the issue of discrimination as the Compliance Notice issued by the HSE was worded in a way that meant that we did not have to prevent people from entering’

Oisin Collins, senior counsel for the restaurant, submitted in court that the EU Digital Covid Certificate regulation provided for a third category of testing. This omission was a clear breach of the regulation itself, European privacy law, the Constitution, the European Charter of Fundamental Rights and the EU Convention on Human Rights, he submitted, adding that his position on the issue of discrimination was unanswerable.

Stephen Moran, BL for the HSE, said the Irish Government were effectively “at large” in relation to how they wished to deal with the issue of re-opening pubs and restaurants at a domestic level, given the serious threat to public health and the rise in cases due to the Delta variant.

District Judge, John King, having heard detailed submissions on discrimination, decided that he did not have to rule on this issue as the compliance notice only went so far as to require records rather than prohibit people from entering.

“This is only the start of the push back against discriminatory laws. We received a letter from the HSE on October 14th that they intend to start inspecting our restaurant again as there has been further complaints of non-compliance,” the restaurant said.

“We intend to now challenge this discriminatory law to the Higher Court.”

37 thoughts on “None Shall Pass”