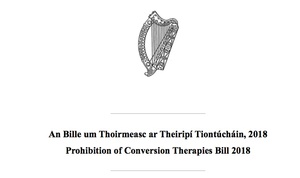 The Prohibition of Conversion Therapies Bill 2018

Sexual orientation and biological sex identity are different things. They are, however, persistently and disastrously conflated by way of an elision now popularly known as ‘gender’. Nowhere is this more apparent than in the draft Prohibition of Conversion Therapies Bill 2018 – (CTB) – deceptively brief and cleverly ambiguous as it stands.

The horrible practice of gay conversion had thankfully become a thing of the past in Ireland. No organisation or professional condones or practices it. Given our popular constitutional and legal support for equality, many are wondering what can have brought conversion therapy into such urgent focus that a dedicated bill is being ushered through the Dáil.

The background to this development is ‘gender ideology’, a theory of human existence that alienates and even denies our essential biological male and femaleness in favour of a subjective definition of ‘gender identity’. This is perhaps typified most controversially in the claims that ‘transwomen are women’ or ‘I am what I say I am”.

Under the new Bill’s draft provisions, what gender ideologists call the ‘affirmative model’ seems set to become a gateway to legally-sanctioned, gay conversion therapy, the very thing it purports to want to prevent. The model treats a child’s claim to a male or female sex identity as instantaneously immutable regardless of their actual biological sex.

We know that Gender Dysphoria, a conviction that one belongs to the opposite of one’s biological sex, which can set in from a very young age, reverses in 80% of children.  Most emerge as same-sex attracted or bisexual. Premature, inadequately explored ‘affirmation’ of gender dysphoria can therefore be a form of conversion therapy itself.

We also know from many professionals and from the personal accounts of detransitioners (people who revert to their biological sex identity) – that for many, their conflict about same-sex attraction, or their failure to conform to regressive sex stereotypes (girls who like soccer, boys who like knitting) – can seem more ‘socially acceptable’ to themselves if they think of themselves instead as being in ‘the wrong body’.

This ‘wrong body’ idea has been proactively and widely encouraged by affirmative model advocates, despite that it entails a potentially dangerous and often intractable psychological rejection of self which bedevils sufferers of all forms of body dysmorphia such as anorexia, bulimia, and body integrity identity disorder.  We do not distort reality to accommodate those conditions. A lot of effort has gone into ‘proving’ that gender dysphoria is different – and that reality must instead be distorted to accommodate it.

The latent homosexuality of the gender dysphoric child may thus be buried, with catastrophic consequences for them by the time they realise their mistake. The case of Kiera Bell in the UK is a high profile example. Bell is a now 23 year-old woman who has challenged the NHS Gender Identity Development Service (GIDS)  for facilitating the removal of healthy breasts at age 20, by which time she had been on a path to transition from the age of just 16, when she was prescribed puberty blockers.

Bell is seeking to establish that no child below the age of 18 is competent to make such life-altering decisions.  “I felt male, thought I was trans, but realised I was gay…I couldn’t sit by while so many others made the same mistake” she says.

To add to this confusion children are increasingly encouraged from early years at school to accept the existence of a veritable sweetie shop of rainbow-coloured, frequently sexualised ‘gender identities’ divorced from the binary sex reality of human existence (By the way, who sanctioned this? The vast majority of parents certainly were never consulted – and yet schools are being pressured to make ‘pledges’ to adopt gender ideology.) Unsurprisingly Rapid Onset Gender Dysphoria (ROGD) is a new and exploding phenomenon, particularly among teenage girls – a lucrative, global niche market for ‘medical transition’.

Under the affirmative model, the change process begins preferably without consultation with the child’s parents where the latter are perceived as being likely to raise any concern or objection.  A name change, or the use of alternative pronouns in the first instance may seem relatively safe but they are far from that.  The first steps on the path to hormones, puberty blockers, breast binding, testicle tucking and surgery, they are a public declaration to peers and others from which it is emotionally and socially difficult to turn back, particularly if adults and gender therapists regard the dysphoric identity as confirmed and unquestionable.

Detransitioners say they are frequently shunned by their former friends in the ‘trans’ community.  There is ample evidence of children who have been put on blockers and hormones within just weeks or months of referral to gender clinics in some countries. Some report being prescribed hormones after a single consultation.

Puberty blockers are thought to affect multiple body systems, not just sexual and reproductive function and feeling. They are not fully reversible, as is frequently claimed. They do not ‘buy children time’. You cannot go back to being developmentally eleven years old if you change your mind at seventeen or twenty five. Your body moves on, adapting as best it can to the derailment of normal, inter-connected, developmental processes.

The NHS in the UK has removed the claim on its website that blockers are reversible but the HSE and other medical and therapeutic bodies in Ireland appear alarmingly reluctant to revise their approach, despite international awareness that research about their effects on immature bodies is seriously inadequate. We have failed children before in Ireland. Are we seriously about to let it happen again?

Many concerned professionals, such as Stella O’Malley of Genspect (a voice for people with gender questioning kids) – are concerned that therapists and parents should not be prevented from ensuring – before, during and after puberty –  that both adequate time and sensitive, impartial exploration of a gender dysphoric person’s state of mind, any possible trauma and their true sexual orientation have been explored.

The minority whose gender dysphoria persists into adulthood must be supported if they decide to try to better align their bodies with their dysphoric feelings. This caring approach is, paradoxically, what this writer believes is the real target of the CTB. Why? Because it gets in the way of applying gender ideology from cradle to grave, no questions asked or allowed.

Supporters of sex identity change on demand have form here, as the introduction of ‘self identification’ in the Gender Recognition Act 2015 attests. Ireland has been explicitly cited by its proponents (in the now infamous Dentons Document – full analysis here ) – as a successful example of where the introduction of gender theory and practice, under cover of unrelated issues such as same sex marriage, diversity training and now conversion therapy, has exceeded expectations.

Most people have no idea that Irish law now permits any man, regardless of motive or past record, to declare himself a woman with all the licence and access that entails – into womens’ and girls’ sports, changing rooms and quotas.

The mention of these facts is invariably howled down by the gender theory apologists as ‘transphobia’ – a tactic that is wearing thin – and which itself must be firmly faced down before further harm is done. It is emphatically not ‘transphobic’ to question any of what is happening, nor to deem it wrong when the evidence clearly demonstrates that it is.

Gender ideology and ideologists are in full denial about all this, providing bad faith actors with all the impunity and encouragement they need – even in the face of abusive and criminal behaviour. Lesbians are now being told they are ‘transphobic’ if they do not wish to sleep with male-sexed people who claim to be lesbian, as a disturbing BBC report has shown. Violent sex offenders are held in women’s prisons. Children are being told they ought not to look or complain if a man exposes himself in women’s changing spaces, as the writer Laurie Penny asserted recently on Twitter.

Vulnerable people are being confused in the name of ‘inclusion’. Perhaps the pervasive Transgender Equality Network (Ireland’s Stonewall) could explain to them why, If their biological sex isn’t real or relevant, how their sexual orientation is real, whether homosexual, bisexual or heterosexual? How can they claim to be champions of LGB rights if they don’t believe in the biologically-sexed basis for those orientations?

The refusal to acknowledge the glaring contradictions of gender ideology should be a red flag about the CTB and our thus far extraordinarily naive response to the gender theory movement. Legislators (and many others who should know much better) have seemingly been swept along on the hubristic tide of well-meaning if woefully misguided clamour for inclusion, tolerance and diversity.

Those qualities are absolutely to be desired and pursued, so let’s be sure that they are in fact what we will get.

Alas, those who would redefine biological reality for everyone else in the name of ‘inclusion’ demand we do so on exclusively gender ideological terms – or be shunned. No other movement has so successfully captured so much of the body politic with so little public debate or information.

Amnesty Ireland and The National Women’s Council of Ireland have embraced gender ideology with such reckless vehemence that they have openly called for those who express concern to be denied democratic representation, no less. Intoning meaningless mantras such as “trans rights are human rights” or “our existence is not up for debate” offers nothing to an understanding of the many and complex issues at stake for gender dysphoric people, for gay and bisexual people – nor for any child, woman or man who dares to believe in the material reality and full significance of their own biological sex.