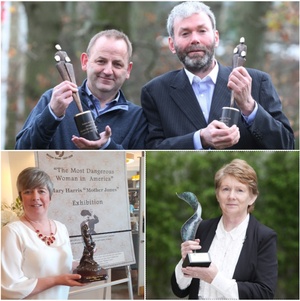 At top clockwise from left: Garda whistle-bloewers Maurica McCabe and John Wilson with People of the Year awards for 2014; Tuam historian Catherine Corless with a Human Rights Award from the Bar of Ireland in 2017; Abuse survivor Louise O’Keeffe with a ‘Spirit of Mother Jones’ award in 2019; Vanessa Foran

Now where was I?

Somewhere around here; PR not journalism….

‘You are a hazard to truth, integrity, transparency and therefore – accountability, which denies Justice.’

Whistle-blowers are organs vital to protecting our democracy.  That is a Supreme Court proven fact.  Several times over.

I will put my hands up here and admit, that for a long time I held a very narrow outlook on who should be crowned and sainted as a whistle-blower.  A whistle-blower worthy of public documentary, bestselling books and feature length films.

This judgement was cast from those that took on the corporate giants and stony walled institutions all on their own, against resistance of all shapes and sizes.  Most of it organised maliciously and from inside every pocket of their lives, their families, neighbours, colleagues, and employers.  They faced strangers and the not so strange who were professionally engaged against them, and while always knowing the not-knowing-what-was going to happen next.

Karen Silkwood, Brigid McCole, Louise O’Keeffe, John Hanrahan, Maurice McCabe.  They should give you an idea of my whistle-blower icons.  Nothing could betray or weaken their own conviction that they were right, that they were wronged.

In addition, there are those that changed how our pillar banking institutions conduct themselves like Eugene McErlean and Padraic Kissane and put millions back into people’s pockets when they didn’t even know they were victims of a crime.  I also feel obliged to include the founders and curators of NamaWineLake.ie in the roll call of regulatory watchers, spotters, and catchers at a time when our actual appointed regulators were fit for nothing.  These people were (in the main) auditors, accountants, and financial advisors, not journalists.

Don’t ever allow anyone undervalue the service Vicky Phelan did for this country when she refused to sign an NDA, no victim of medical negligence should ever be forced into signing an NDA.  But it wasn’t a journalist that brought that cervical smear testing scandal to us, it was women on the steps of the High Court.

There are also those that are determined to secure justice for people many of us may never know the names of, like Catherine Coreless.  A local lay historian did the years of researching and requesting, the graft, the groundwork, and the digging, and then shocked the world with 798 truths still waiting to be exhumed and told.  Not a journalist.

These are the people that put the stories into journalists’ hands, to scoop their rivals and publish their books. A mere handful quoted here, but there are so many others that qualify as whistle-blowers too.

All the women that came forward to seal the legacy that men like Jeffery Epstein, Harvey Weinstein and Roger Alies deserved.

All the men that put Bill Kenneally, Sean Fortune, Ivan Payne and too many others exactly where they deserved to be, in prison.

The athletes, the students, the sons, the daughters, the nieces and nephews, the thousands that come forward with secrets everyone but themselves wanted kept hidden.

They might be referred to as victims, or witnesses’ or plaintiffs, even defendants, but they are bringing us truth and facts about crimes that cannot and should never go unpunished, or ever be allowed remain hidden.  Or sealed by a government whipped vote.

There are those who are in witness protection schemes, and there are those that endeavour to remain anonymous. Even those that might be classed locally as supergrasses, or where I grew up – hangmen.

We should never forget that there are also those that Leo Varadkar himself sought out with his ‘Cheaters Cheat Us All’ endeavours; the old-fashioned old school tell-tale-tattlers.

Terry Prone might say; So?  Yet anyone reading this already knows, that whoever they are, or what their story is, if they are telling a truth we need to know of, then they are to be valued, and listened to; not ridiculed, and mocked, and never undermined.

From Vatican City to our very own Police Force.  In every crevice on this dying planet there is a secret misdeed that someone or some corporate entity or some government institution does not want known.

Every day we come across lately is telling us more about the corruption that was played out under the cloak of the Covid Pandemic and Lockdowns.  Why would anyone want to make it difficult for people to come forward, from warehouse workers to Big Pharma executives?

We must always ensure there is a safe and loyal home for truth to be told.

Ireland is already feeling the pain of absurd, incompetent, and out of control Government tenders, the Rural Broadband Scheme and the National Children’s Hospital are just two.

Does anyone living on this island really think it is all going to end well?

Our mainstream media – the mastheads, news & radio, social media feeds, even light entertainment telly, the combinations of which Michael Lowry might also call a ‘cosy cartel’ who come into our households whether we want them there or not, are more intent on writing to obscure, and undermine, and not to enlighten and give shine to truth and facts.  This is what they are engaged to do, and it is a writing style we have left them away with for too long.

My first grown up experience of professional credentialed journalists writing to obscure for their own professional self-interest goes back to the Kerry Babies and Lynch Tribunal.  And here we are over thirty years later, and many more tribunals have come, cost millions and gathered dust.

Yet too many unsolved murders in Ireland remain that can be solved with truth that is currently in someone’s gift.

Corruption is endemic enough to be a laughing matter, and I hold firm on the view that accepting incompetence in the public and political sector needs to be treated as corruption.

Until we stop sneering and sniggering at it, and calling it names, like jobs for the boys, and sending it on its way with a nod and a wink, then you are assured it will continue, and white-collar criminals getting everything seized, plus their kids’ toys, before lengthy prison sentences will still be only something you see on a HBO series.

The behaviour we have become accustomed to from the Irish journalist genre alluded to here last week promises one thing; they are putting truth at risk.

No matter what they get identified as – whistle-blowers, victims, plaintiffs even disgruntled employees or out-of-pocket businessmen, whatever shape, or size they take or where they come from, or what they sound like, they may still have a truth we need to know. So don’t mock them, admire them.  And learn to form your own independent opinion of their story.

Otherwise, you are part of the cover up they are seeking to out, and journalists selling you what they have been told might just as well be lobbyists.

Along with her day job Vanessa Foran is a regular Broadsheet and Village Magazine contributor and can be followed on twitter @akafrillykeane.

Last week; A Reckoning At The Web Summit

A Reckoning At The Summit