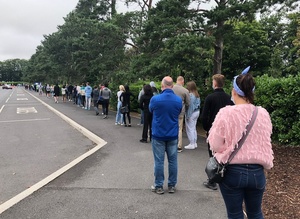 The motivations of the anti-vaccination members of our communities are difficult to understand.

To more than 90 per cent of us the opportunity to protect ourselves from getting sick or worse, through availing of the vaccines, was an opportunity we took, once we had assessed the risks and benefits.

Those we knew that did not avail of the vaccine seemed prone to convoluted and often extreme theories of vaccines, science, and even basic maths. Persuasive arguments on vaccine benefits for the elimination of diseases like smallpox and polio, were countered with inane conspiracy theories.

However, given the low instance of Covid disease in the outdoor, regulated summer, most of the 90 per cent were tolerant of their unvaccinated friends and avoided pointing out to them that they were often repeating nonsensical jargon that lacked any scrutiny.

In hindsight it was ill-judged to let the conspiracy theories, anti-science and anti-vaccination go unchallenged.

It is difficult now for the 90 per cent to remain tolerant, however, as the unvaccinated get infected at roughly 10 times the rate of the vaccinated and the resources for dealing with infected people are now stretched to breaking.

Frontline staff, who have now worked flat out for 20 months, are treating the 10 per cent who had a choice to protect themselves through vaccination but chose not to.

There is a much used saying “ar scáth a cheile a mhaireann na daoine”, it is worth emphasising that this is true not alone for the unvaccinated “na daoine” but also the 90 per cent in the community.

Do The Shake ‘n’ Vax And Put The Freshness Back

89 thoughts on “Living In Each Other’s Shadows”