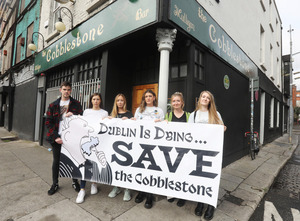 Dublin City Council has refused planning permission for a hotel to be built around the Cobblestone pub in Smithfield.

Marron Estates had applied to the council for permission to construct a nine-storey hotel at 77-80 North King Street.

The development would have meant the partial demolition of one of Dublin’s most famous traditional music pubs.

Hundreds of objections were lodged with the council and demonstrations were held to save the pub.

Refusing planning permission the council stated the development would be “overbearing and significantly out of scale and character with the prevailing architectural context“.