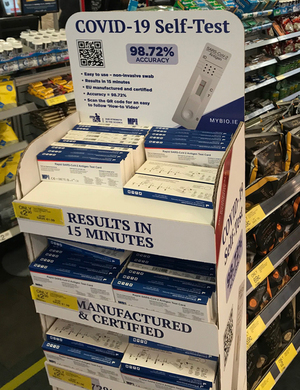 Minister for Health Stephen Donnelly earlier told RTÉ’s Today with Claire Byrne that the government has scrapped a subsidy for antigen tests as the price of kits had fallen. He said kits which had been broadly retailing at €8 per test were now under €5 and within reach and that the ‘market has done it itself’.

“It beggars belief that Health Minister Stephen Donnelly would announce a U-turn of this scale, as an aside in a media interview, on RTE radio – after senior ministers spent weeks assuring people a subsidy scheme was nearing completion.

“At the start of the month, Nphet changed its advice on antigen tests and advised that anyone engaged in so-called risky activities – which can be summarised as, leaving your home to meet people indoors – should take two antigen tests per week.

“In recognition of the increased financial burden this places on households, particularly low income households, the government opted to provide a subsidy for antigen tests, rather than offer them free of charge.

“Now we learn that because antigen tests are available in certain retailers for approximately €3 or €4 a test, the government is scrapping its proposed subsidy. Apparently, it believes that this is an affordable price for households to absorb.

“This again shows how out of touch this government has become. It has no comprehension of the financial struggles that ordinary people in Ireland are enduring. Antigen tests that are €3 or €4 each may be affordable for government ministers, but they are priced out of reach of many low and middle income workers and families.”

Free To Those Who Can Afford It

21 thoughts on “Test The Market”